Catching up with DiploLab: Collaboration and Student Success 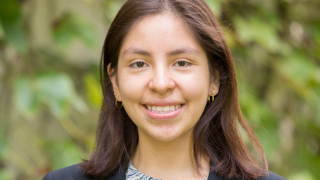 Since Fall 2019, the School of Diplomacy has given students an unparalleled opportunity to conduct hands-on research under the guidance of Professor Joseph Huddleston through the DiploLab.

In a recent interview, Professor Huddleston expressed his wish for the DiploLab to have its own set of goals initiated and led by Diplomacy students. "Students," he said, are the force behind its direction," While the collaborative research space acts as an opportunity generator.

DiploLab introduces students to the world of research while allowing them to work with each other and with faculty members, to acquire knowledge creation skills. Through this process, students are able to begin a project, see it through all its steps, and have freedom in exploring new ideas. 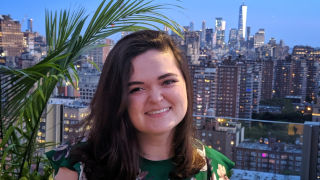 For graduate assistant Caroline Hall, the DiploLab's growth into a collaborative research team has been the highlight of her graduate school experience.

Caroline Hall, Huddleston's graduate research assistant, said that "watching DiploLab grow from a few dedicated students into a collaborative research team of many incredible minds" has been a highlight of her time in graduate school.

Daniela Maquera Sardon, a senior Diplomacy student and research assistant for the DiploLab, described the research space as an environment that forces you to step out of your comfort zone for personal and academic growth. She emphasized that "you cannot quantify how much you learn because there's always something new to learn." She said the lab's open approach to learning, where students can address real-world issues by acquiring a new set of skills. These skills include coding, transcribing, data gathering, use of statistical software, and copy editing.

Students also help Huddleston with research for his upcoming book, which focuses on how self-determination movements and separatist states use diplomacy to achieve global recognition and independence. Research assistants not only gather data for the project but also observe what goes behind the scenes of publishing a book. They investigate real-life experiences by accessing data from Yemen, such as interviews and surveys. According to Hall, managing this data collection process for the last two years has helped her hone the data skills she will need for her career. 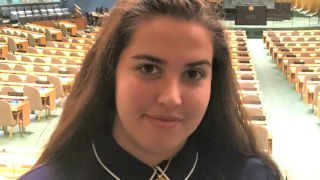 Keanna Grelicha joined the DiploLab team last fall and has been applying what she's learned in class to real-world issues.

While Hall and Maquera Sardon have been involved with DiploLab since its creation, Keanna Grelicha joined the team in the fall of 2020. For her, DiploLab has been rewarding. "I am gaining new knowledge and working on current world issues. Applying materials that I learn in the classroom to real-world situations is something that I always look forward to, and DiploLab provides that opportunity in abundance." According to Grelicha, DiploLab has offered her and her peers an opportunity to not only collaborate, but also learn from one another. "I value the professional, collaborative, and family-oriented environment that Diplolab holds, and I am certain that this experience will keep us all connected even after we graduate."

Recently, Huddleston expanded DiploLab's opportunity for research through its collaboration with the Center for Peace and Conflict Studies (CPCS), where he also works. Although Huddleston does not direct projects, Huddleston provides research methods and designs surveys to further assist Professor David Wood, the Center's director. The collaboration reflects the Center's aim for its research to reach a broader audience through the assistance of DiploLab students. Both DiploLab and CPCS are set to embark on more exciting projects with students. The most recent evidence of this collaboration is an article published in The Washington Post, co-authored by Wood, Huddleston, and Ghoorhoo.

To further the collaborative spirit of DiploLab, Professor Sara Bjerg Moller will be joining the the list of faculty involved in DiploLab by contributing her own research related to NATO. Not only will she further introduce students to a new research scope but she will also assist Professor Huddleston in plans for next year. Moller's mentorship will provide research assistants with opportunities to learn from her extensive knowledge and past experiences with NATO.

Discussing what the future holds for DiploLab, Huddleston hopes that "DiploLab students will continue to work together as a unit to pursue big goals and mentor one another." Five years from now, he envisions DiploLab as a stable model with funded positions for future research assistants. Huddleston hopes for an increase in resources as well as increased student control and influence on the direction of the lab.

"DiploLab will be what diplomacy students want it to be," he concluded.