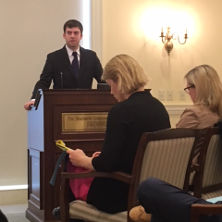 I study colonial North America, the United States between the American Revolution and the Civil War, the 18th- and 19th-century Atlantic world, and Native American history.

I am currently working on a book on Albert Gallatin (1761-1849), a man best known for his criticisms of Alexander Hamilton and his subsequent role under Thomas Jefferson and James Madison, as the longest serving Treasury Secretary in U.S. history. My book manuscript uses his long, varied life and career—youth in Geneva, business enterprises in North American borderlands, legislator in Pennsylvania and in Congress, Treasury secretary in Washinton, diplomat at Ghent, Paris, London, and elsewhere, president of a bank and two learned societies in New York City—to explore the development of a democratic political economy in the United States. For Gallatin, it was premised on dispossession of Indigenous people and geared toward creating and increasing capital, and extending its circulation, heedless of the resulting distribution. This process focused on the expropriation and development of North American resources, but always within patterns of transatlantic trade, investment, conflict, and negotiation.

My first book, Native Tongues: Colonialism and Race from Encounter to the Reservation, examined intercultural communication between Natives and Euro-Americans and how these gave rise to theories about Native languages and the clues they were thought to hold about the ancestry and social development of peoples. I argue that those ideas informed the administration of U.S. colonialism, guiding efforts to understand and simplify Native diversity on the one hand, and justifying the elimination of Native languages on the other. I also argue that genealogical and psychological ideas became fused for much of the 19th century in a conception of race that transcended mere physical appearance.

At Seton Hall I teach courses on Colonial America; Revolutionary America; Democracy, Slavery, and Manifest Destiny; and Native American History before Removal. I also teach both halves of the American history survey as well as departmental seminars for the major.

I am also a member of the Editorial Board of Commonplace: The Journal of Early American Life (http://commonplace.online/), the Advisory Council of the McNeil Center for Early American Studies, and the Revolution NJ Scholarly and Public Programs Working Group.

OTHER HONORS AND AWARDS