Diplomacy on the Forefront 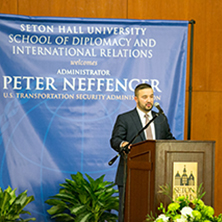 Mohamad Mirghahari was a Presidential appointee under the Obama Administration who served as Senior Advisor to the Chief of Staff for the Transportation Security Administration (TSA), prior to that he has spent the past 14 years working in key leadership positions within the Department of Defense, in support of counterterrorism initiatives that have significantly impacted mission-critical outcomes across the globe. While at the Department of Defense he served in multiple global and domestic posts including but not limited to Bahrain, Afghanistan, Oman, and Special Operations Command Central (SOCOM) at MacDill Air Force Base in Tampa, FL, where he provided expertise in support of special ops elements of the Army, Marine Corps, Navy and the Air Force. Mohamad is a recipient of the Secretary of Homeland Security’s Award for Excellence 2016, in recognition of his outstanding work for the TSA, and numerous additional commendations and awards from the Department of Defense, The Pentagon, NATO, and the Civilian Combat Support Award. Mohamad still serves as a special advisor to the Department of Defense.

Diplomacy on the Forefront