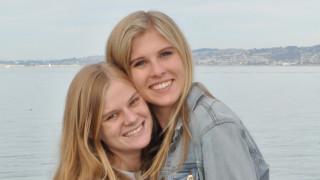 Kelly and Emma Tobin's shared passion for international affairs led them both to study at the School of Diplomacy.

The School of Diplomacy is proud to have hosted multiple members from a number of families who share an interest in international relations. This school year, we had the pleasure of welcoming a new duo when Kelly Tobin joined her older sister Emma as a member of the Diplomacy community. Kelly completed her freshman year this spring, and her sister, Emma Tobin, is a member of the Class of 2020.

Both were drawn to study diplomacy through passions for international affairs, traveling, trying new cuisine and world languages.

Emma says: "We both grew up in the international education system which emphasizes being a good global citizen. It's a large part of what has led us to wanting to work internationally in the public sector. We also understood the importance of practical work experience and had a desire to develop our experience by interning in New York City."

We asked the two about their shared experience thus far and how Seton Hall has strengthened their relationship. 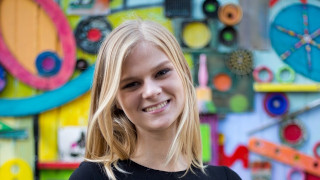 Kelly, the youngest of the duo, just joined us last fall. Upon enrolling, she was excited about the many offerings that would be available to her, including language-learning opportunities, Seton Hall's Mock Trial team, the Honors program, and being able to spend time with her sister after taking a gap year and being busy with summer internships.

So far, she's enjoyed taking courses with international security expert, Assistant Professor Sara Moller, and with our specialist on refugee movements, Professor Assefaw Bariagaber. Both professors have, "pushed my thinking abilities while introducing me to subjects that I only had a passing knowledge of and helped me understand them on a deeper level," says Kelly.

Since joining us in the fall, Kelly has not shied away from getting involved on campus. She is a member of the popular Slavic Club and was selected to be a Resident Assistant next year. Her participation in the Mock Trial Team has been a great outlet to further hone her diplomatic communication skills, skills that were recognized and rewarded at a regional tournament hosted by American University. She is grateful to have had the opportunity to make memories with her sister along the way.

"One memorable moment for me was participating in the School of Diplomacy's Open House, where I was able to speak to potential students alongside Emma. While I hear a lot about her adventures and experiences, to be able to be there physically supporting her and then sharing my own journey, including why I chose Seton Hall - which was in part due to her - was an amazing experience. For me, it illustrated the positive relationships we have developed with the faculty and staff of the School, highlighted the excellence of the Diplomacy program that both of us chose to pursue, and was all more special because we got to represent the School together."

In the future, Kelly hopes to work in defense law with the Federal Bureau of Investigation, or in forensics. "I would like to work in any area where I can use my language skills, Russian and German, and be able to travel," she says. Emma, who graduated in May, was thrilled Kelly chose Seton Hall. "I wanted her to love my second home as much as I did."

Emma, a Class of 2020 graduate, reflects fondly on her time at the Hall. "Whether it was meeting my best friends at Pirate Preview or having the honor of being featured on the front page of the Seton Hall website, I've been incredibly grateful for my Seton Hall community and the endless support I have received. I'm incredibly appreciative of all of the efforts my stellar professors made to prepare me for a successful career, and to proudly represent the University on a national level as a Truman, Boren and Critical Language Scholar."

Throughout her college career, Emma shared her affinity for Seton Hall and the School of Diplomacy by connecting with prospective students as both a Diplomacy Student Ambassador and a member of the University's Blue Crew. She was actively involved in the Student Alumni Association, Know More campaign, Zeta Tau Alpha, Student Activities Board, and the Division of Volunteer Efforts.

"Going forward," says Emma, "I know that I will never forget our Christmas at the Hall Tree Lighting celebrations, the energetic basketball games, being involved in future students' admissions experiences, and volunteering in El Salvador with DOVE."

Following her graduation, Emma Or volunteering in El Salvador with DOVE"working at DAI Global, LLC. "I am currently working on international development projects in Egypt and Iraq as a contractor for USAID. I love my job thus far and hope at some point to transition either to USAID or the U.S. Department of State."

While Emma and Kelly have carved unique college experiences, they both agree that Seton Hall has brought them together in ways they didn't expect. Emma remembers, "Kelly was a freshman in high school when I graduated and left for college. I felt like I missed out on a lot of important moments for her since I wasn't able to fly home to California as much as I would've like. When Kelly chose Seton Hall, I was both excited and apprehensive because I wanted her to love my second home as much as I did."

Emma was thrilled to watch her sister grow during their time together at the Hall and describes it as one of her favorite parts of her college experience. She continues,

"Although Kelly and I weren't together at Seton Hall long before I graduated, I am incredibly grateful for every dinner we shared, the Broadway show we saw, and every hour we spent in the library studying. I am very aware that my passion for international development and public service means that I likely won't be living close to my family in the future. However, having time to learn about and share in new experiences with Kelly as a young adult has been a precious gift that I wouldn't have had if she hadn't chosen Seton Hall's Diplomacy program."

Kelly shared similar sentiments on how even though their time spent together in South Orange was short, it was very memorable, and allowed them to reconnect while she also learned new things about herself.

"Emma helped me to break out of my comfort zone. She introduced me to New York City, the different opportunities at Seton Hall, and shared her friends, and lunches, with me. Emma is part of the reason I made my decision to attend Seton Hall – I knew it was the right decision after spending a day going to classes with her. The care her professors showed her and the fun she had made me want to come and have a similar experience. Studying Diplomacy together allowed us to talk about similar classes we had while bringing us closer as sisters."

They came as sisters and will leave as fellow Pirates, with memories to reflect on after they've both embarked on their post-grad journeys. The Tobins both continue to be examples of the Great Minds - and families - that make up Seton Hall.