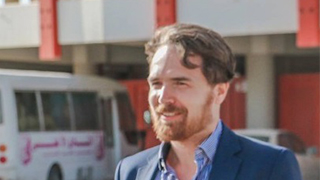 David Wood, Seton Hall School of Diplomacy and International Relations Professor of Practice, and the Director of Peacebuilding and State-building in the Middle East and Northern Africa (MENA) at the School's Center for Peace and Conflict Studies (CPCS), and Diplomacy Alumnus Sushant Naidu are currently assisting the United Nations Development Programme's (UNDP) Regional Bureau for Arab States (RBAS) which covers the MENA region to help establish a regional conflict prevention strategy.

The countries located in the MENA region face their own unique challenges when it comes to conflict prevention, peacebuilding, security, development, and more. CPCS is currently working with UNDP RBAS to develop a conflict prevention strategy that would work for the region. The CPCS team is ensuring that several important issues like gender, youth outreach, and climate change are incorporated in the ultimately strategy. The process of developing the strategy is a consultative one, and the CPCS team will go through rounds of consultations; the first round will be with UNDP Country Offices, the second with partners in conflict prevention outside of UNDP, and the third with States. Thus far, Professor Wood and Sushant have conducted consultations with Country Offices in Yemen, Algeria, Tunisia, Kuwait, Iraq, Somalia, Lebanon, Saudi Arabia, Syria, and Sudan.

Sushant believes that the UNDP-CPCS collaboration is a natural fit given the Center's focus on peace and conflict along with Professor Wood's 15-years of experience in conflict resolution and peacebuilding/state-building.

When asked about working on the project, Sushant remarked, "It's one thing to learn about conflict prevention in class but working on this project has allowed me to see the nuances that exist in conflict." One of those nuances he shared about was the use of terminology and how it varied in the ten different countries they consulted. A word like 'reconciliation' might work in Lebanon but not in Iraq because in the latter, the term was associated with making peace with returnee ISIS fighters and their families. In Tunisia, the term 'social cohesion' could be used with no problems, but in Lebanon the word had been associated with integration of Syrian refugees into Lebanese society and this topic was a sensitive one in the country.

While the UN comes under constant criticism, Sushant added that in the country team consultations, he repeatedly heard how respected UNDP is in each country because of its work and ability to access areas where other organizations struggle to make headway. "It has also been really great to get candid feedback from country teams on how the RBAS can better support country offices," Sushant added. The CPCS team has received positive feedback from the RBAS on their reporting and will soon present the first draft of their strategy. The team will go through a couple more drafts after meetings with external partners and States. Professor Wood and Sushant will finalize the strategy by the end of the year.

Sushant is currently working on the UNDP project out of Amman, Jordan, where he is also contributing to CPCS' Yemen research project on economy and peacebuilding in partnership with the Center for Strategic Studies at the University of Jordan.

The Seton Hall University School of Diplomacy and International Relations' Center for Peace and Conflict Studies is a creative hub that merges cutting-edge academic research, education programs and practical initiatives that reduce violence, and build more peaceful societies and international relations. The Center promotes interdisciplinary research on a wide range of topics related to peace and conflict with an emphasis on conflict prevention, management, resolution, and post-conflict peace building and reconstruction. The Center is committed to advancing the understanding of social conflict, global peace and conflict issues through multidisciplinary, multilevel, and multicultural approaches. Through the Center's ongoing research projects as well as education and practice activities, faculty, students, alumni and colleagues work together to develop the interdisciplinary field of peace and conflict studies. Learn more here.