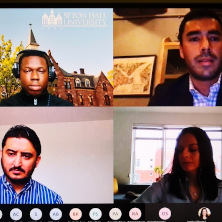 All Conflict is Local Conference Returns 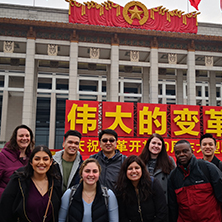 A Trip for the Ages All Conflict is Local 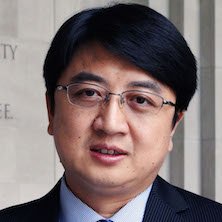 Dr. Zheng Wang is the Director of the Center for Peace and Conflict Studies (CPCS) and Professor in the School of Diplomacy and International Relations at Seton Hall University. He is currently also a Global Fellow at the Kissinger Institute on China and the United States of the Woodrow Wilson International Center for Scholars, a Fellow of International Security at New America, and a member of the National Committee on United States-China Relations (NCUSCR).

Dr. Wang has extensive professional and academic experience in the Asia Pacific region. He has been a Jennings Randolph Senior Fellow at the United States Institute of Peace (USIP); the Boeing Visiting Chair in International Relations at the Schwarzman College, Tsinghua University; the Dr. Seaker Chan Endowed Visiting Professor at Fudan University in Shanghai, China; a Carnegie Fellow at New America, and a Public Policy Scholar at the Wilson Center. He has also served as a Visiting Professor or Visiting Fellow at multiple research institutes in different countries, including Saltzman Institute of War and Peace Studies of Columbia University, Nanjing University, National University of Singapore, and University of Tokyo.

Dr. Wang’s research interests lie in three closely connected areas: (1) identity-based conflicts, nationalism, and the politics of historical memory; (2) peace and conflict management in East Asia, with a special focus on China’s rise and its impact on regional peace and security; (3) foreign-domestic linkages in Chinese politics and foreign relations.

Dr. Wang is the author of the book Never Forget National Humiliation: Historical Memory in Chinese Politics and Foreign Relations (Columbia University Press, 2012). This book received International Studies Association’s Yale H. Ferguson Award in 2013. It was heralded by a book review as “qualif[ying] as a landmark in the study of Chinese nationalism.” Its Japanese version 中国の歴史認識はどう作られたのか was published in Japan in 2014. His 2018 book, Memory Politics, Identity and Conflict: Historical Memory as a Variable (Palgrave Macmillan, 2018) aims to contribute to methodological discussions concerning the use of historical memory as a variable to explain political actions and group conflict. Dr. Wang is currently under contract with the Oxford University Press to write a book about the rise of nationalism and populism and the crises in the US-China relations.

Dr. Wang has published journal articles and book chapters in various peer-reviewed publications, including: International Studies Quarterly, International Negotiation, Asian Survey, Asia Policy, History and Memory, Journal of Contemporary China and Wilson Quarterly. He is regular contributor of op-ed articles in national and international media, such as The New York Times, TIME, The National Interest and The Diplomat and Financial Times Chinese.

In recent years, Dr. Wang has received multiple highly competitive fellowships and grants from prestigious institutions. The grant award from the Henry Luce Foundation supports him to conduct dialogues and joint research between the US and China over the South China Sea disputes. The most recent Luce Dialogue on U.S.-China Relations During and After the Pandemic has brought together leading academicians, policy researchers, and former high-ranking defense and diplomacy officials, from the U.S. and China, for a series of on-line dialogues. The project aims to keep channels of communication open between the two countries during a time when the bilateral relations are at a crisis point and in-person meetings have become impossible during the pandemic.

Dr. Wang is the inaugural director of the Center for Peace and Conflict Studies (CPCS). In recent years, the Center has received multiple external grants from prestigious foundations and government agencies. The CPCS’ focus areas include Asia-Pacific security and the U.S.-China relations, peacebuilding and statebuilding across the Middle East and North Africa, Catholic and religious peacemaking, and diplomacy and conflict resolution training and mentoring. As a researcher and a practitioner, Dr. Wang regularly conducts conflict resolution trainings and has acted as a facilitator in several interactive conflict resolution dialogue programs between participants of China-Japan, Mainland China-Taiwan, and U.S.-China in recent years.

All Conflict is Local Conference Returns

A Trip for the Ages

All Conflict is Local