For the first time in the team's history, Seton Hall's Model United Nations (SHUNA) has been named one of the 25 top collegiate Model UN teams in the nation, ranking 12th out of over 100 Model UN programs. The product of student initiative dating back to 1999, SHUNA's climb through the rankings is the direct result of the club's history of dedication to both training and competition, both nationally and internationally.

On average, the club typically competes in 2-4 conferences a year, but this year, their collective energy and ambition has fueled delegations traveling to a total of 8 conferences, hosted by Boston University, Yale University, Cornell University, and Emery University in the fall, followed by Princeton University, Mount Holyoke University, Penn State, and the College of William and Mary this spring.

Seton Hall's Model UN team engages student delegates in simulations of global negotiations. Negotiations may be historical, fictional, or current affairs related. Delegates debate issues such as disarmament, humanitarian crises, territorial disputes, or armed conflict from the perspective of different countries or famous figures like the CEO of Microsoft and even Tybalt from Romeo and Juliet. Past conferences have engaged delegates in simulated negotiations over the Mexican Drug War, the Warsaw Pact, and even the colonization of Mars.

This isn't the first time that Seton Hall's Model UN has been recognized for its high caliber. The team has been ranked in the top 50 in the nation since 2016, a testament to the prowess of its members and their collective work in preparing trainings, providing mentorship, skills workshops, and simulations. Stephen Hoffman, a junior majoring in political science and history and current President of SHUNA, expresses that:

A steadfast commitment to trainings and practice has certainly led us to this point, but in addition, the energy and work that the executive board has put in has been nothing short of remarkable. They have been so diligent in their efforts and we have really worked as a coordinated and cohesive unit throughout the semester. 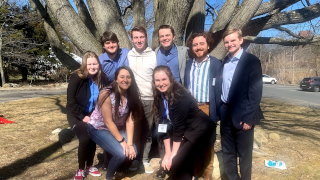 SHUNA's Secretary, Julia Nicolls, also highlights the leadership upperclassmen have exhibited as being key to the team's success.

We have a lot of great upperclassmen who have been with the club for a while and continue to grow. There is a healthy acknowledgment that each of us always has room to improve, and that motivates us to strive to be better delegates, which then makes us work hard, and ultimately yields the type of success that we are now celebrating.

Acting Dean and faculty advisor for SHUNA, Courtney Smith, makes it clear that SHUNA's new ranking is a testament to the leadership that the team has always exhibited, across tasks of all shapes and sizes, from organizing mock simulations on campus to planning conference itineraries. He says,

The leadership of SHUNA and the membership deserve all of the credit for their success. The students design and implement their own training, hand pick the conferences that they attend, plan their own travel and mentor each other on the best strategies for success at both individual and team levels. 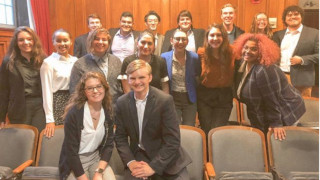 At Yale University this past fall, 5 members won individual awards and at Cornell University, 11 out of 16 members won, with the team beating out Columbia and Georgetown. This academic year alone, SHUNA has collected 32 awards from the 6 conferences they have attended thus far. Among those awards, 17 were for Best Delegate, three were for Outstanding Delegate, and the remaining awards were Honorable Mentions and Verbal Commendations.

The team boasts 40 active members across all class years, 30 of whom have competed at least once so far this year. "I am very proud of how much our team has expanded," Elena Soisson, SHUNA's Treasurer, raves. "We are now attending more conferences per semester than the club previously participated in over the course of a year, and we are being recognized for the work that we have put in. Success not only breeds success; it breeds excitement and enthusiasm among our membership and SHUNA alumni alike."

It's a common misperception that students need to be majoring in diplomacy and international relations to be involved with SHUNA. This couldn't be further from the truth. Students of all fields of study are welcome to become members of SHUNA. All that is needed is an interest in how intercultural dialogue and negotiation work to resolve global issues. As Soisson notes, "Participating in SHUNA has allowed me to practice and hone my public speaking, teaching and mentoring skills. These are strengths and skills that all students, diplomacy or not, can benefit from."

SHUNA has risen in the ranks of teams from across the nation and continues to represent the Great Minds of Seton Hall beyond our campus in conversations that seek to tackle critical issues on the global stage. The School of Diplomacy is proud to have been a part of SHUNA's trajectory over the years and is eager to see what the spring holds for this incredible team.