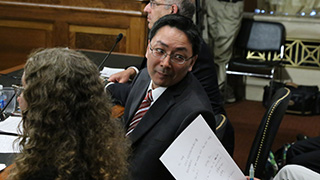 As the COVID-19 pandemic continues to surge throughout the world, Professor Yanzhong Huang, Director of the School of Diplomacy and International Relations' Center for Global Health Studies, and a Senior Fellow for Global Health at the Council on Foreign Relations remains a sought-out global health expert on the impact of its continuing spread. Huang, who specializes in the security and foreign policy aspects of health issues, has authored the book Governing Health in Contemporary China and is the founding editor of Global Health Governance: The Scholarly Journal for the New Health Security Paradigm.

Looking at U.S. states throughout the nation that are experiencing a rise in COVID-19 cases, and specifically an analysis of Texas coronavirus hospitalizations hitting a new high, Huang told CNBC, "Before a vaccine becomes widely available, we can only hope that ... the pathogen becomes less virulent and people come to treat it like seasonal influenza."

Huang spoke to Bloomberg News on the decision by Beijing to shut schools as it tries to half a new coronavirus outbreak spreading to neighboring provinces. He discussed how high the costs of a complete shutdown would be in a population as large of Beijing compared to the earlier shutdown of Wuhan. "A city-wide lockdown in Beijing would not only reverse the process of economic and social reopening, a key policy objective of the party, but also undermine considerably the government’s own narrative on the success of its anti COVID-19 campaign," Huang said. "The social, economic, and political pain might be way too high to justify a city-wide lockdown."

When discussing the situation with The New York Times, he said that while the number of cases in Beijing are still small "this is in Beijing, the political and economic center, and so it has this symbolic meaning."

In an opinion piece in the South China Morning Post on how coronavirus is poisoning US-China relations, Huang described how the pandemic has rekindled conspiracy theories, renewed criticism and hostility, and left an American leadership void for China to fill, while inflicting greater economic damage on the US. He writes: "State and official media outlets in China are saturated with comments and posts that portray the US as a diminishing and hostile power. In the US, a recent Pew survey suggests that roughly two-thirds of respondents have an unfavourable view of China, up nearly 20 percentage points since 2017."

Links to selected media coverage include: