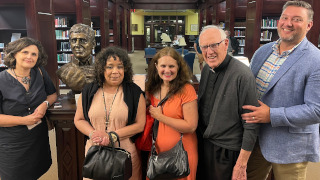 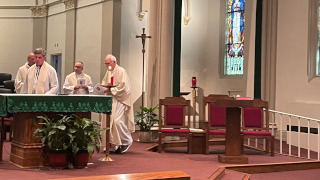 Msgr. Liddy concelebrating Mass at the chapel at Duquesne

Dr. Murzaku presented on the Catholic Studies program at Seton Hall University focusing on the theological backbone of Catholic Studies academic program which is based on "Cor ad Cor Loquitur" (heart speaks to heart) which is St. John Henry Newman's motto when he became Cardinal in 1879. That is truly an important aspect of all Catholic Studies, as well as the Core classes. In Catholic Studies/Core courses the dialogue of revelation and reason happens, and the Catholic Intellectual Tradition flows from "the heart" through all the disciplines throughout the university. Catholic Studies/Core courses involve personal involvement and engagement. They are not lecture classes, where the professor imparts mere knowledge. Hearts are touched. Prof. Landrau and I, since we both teach Catholic Studies/Core III classes ourselves, as well as celebrating the Catholic Intellectual Tradition and inter-disciplinarity in Catholic Studies found also in the Core, presented on key figures and issues important to our work in the Core as well as in Catholic Studies. Prof. Landrau's topic was "Saint Oscar Romero and Pope Francis: Two Latino Leaders. Two Different Times. One Message of Love and Hope." Many of the listeners came up and told her how interesting they found this presentation. I spoke about "The Core, Dante, and America's Race Problem," exploring how Dante's depiction of the facing and confession of sin is relevant to the need in America to confess and to repent of our country's great sin of racism. We all enjoyed the graciousness of the audience and conversations emanating from all the presentations (our own as well as the many others who presented). 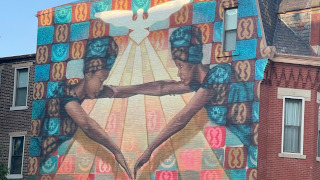 Mural on Duquesne campus of the Holy Spirit descending

We also very much appreciated a visit to the National Institute for Newman Studies (NINS), where we toured the many books linked to St. John Henry Newman and visited a chapel, reminiscent of the one in Littlemore, in Oxford, UK, where Newman lived after his conversion to the Catholic faith. In fact, the benches in the NINS chapel were from Littlemore. Charles Michael Shea, Core Teaching Fellow, has been an affiliate of the NINS when researching for his book Newman's Early Roman Catholic Legacy (Oxford University Press).

Duquesne University of the Holy Spirit (to give it the full title it bears) was started in 1878 by the Spiritan Fathers. The focus on the Holy Spirit was clear throughout the campus, from a giant mural of the Holy Ghost descending to sculpture of fire (symbolic of the Spirit) in the heart of campus. We all attended an opening Mass, at which Dr. Murzaku read, and which Msgr. Liddy concelebrated. Interestingly, one of the faculty from Duquesne attending the Symposium mentioned that the chapel on campus is where the Catholic charismatic movement started with a group of students who became filled with the Holy Spirit and began speaking in tongues, a key event that occurred in 1967.

Overall, the symposium was enlightening and inspiring, and we all felt excited to be part of this sharing of ideas, vision, and fellowship among colleagues from around the country. It was also wonderful to share time with my four extraordinary Seton Hall friends who attended.