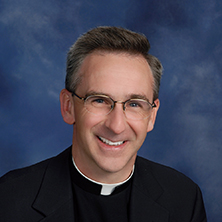 Reverend Stephen Joseph Fichter, Ph.D., Adjunct Professor of Systematic Theology, obtained a Ph.L. and an S.T.B. from the Pontifical Athenaeum Regina Apostolorum in Rome, an M.S.W. from Fordham University's Graduate School of Social Service, and an M.A. and a Ph.D. in Sociology from Rutgers University.

Father Stephen is a research associate specializing in clergy studies at the Center for Applied Research in the Apostolate (CARA) at Georgetown University. In coordination with the National Organization for Continuing Education for Roman Catholic Clergy (NOCERCC), he has worked on many Cultivating Unity projects for dioceses throughout the United States.

Father Stephen is co-author of the book, Same Call, Different Men: The Evolution of the Priesthood since Vatican II, published by Liturgical Press. His newest book, Catholic Bishops in the United States: Church Leadership in the Third Millennium, will be published by Oxford University Press in 2019.

Father Stephen was the Parochial Vicar at St. Gabriel the Archangel in Saddle River from 2000 to 2008. He then became the Pastor of Sacred Heart Parish in Haworth until he assumed the role of Pastor at Saint Elizabeth of Hungary Parish in Wyckoff in July 2017.