The only Master of Arts program of its kind since its founding in 1975 at Seton Hall University, the Jewish-Christian Studies Graduate Program continues to serve as a model for educating in ways to increase mutual understanding and harmony.

Our programs have been helping educators and scholars to make a positive difference for 40 years. Many of our alumni are leaders and peacemaking educators who are positively impacting our world today in remarkable ways - from advocating understanding, respect and goodwill throughout schools in New Jersey and New York to countering the xenophobia that often plagues tribal communities in Africa. 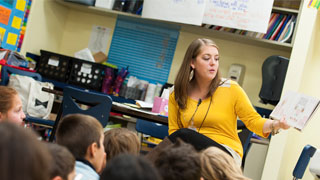 Academic Program
Drawing from comprehensive and comparative studies of Jewish and Christian sources and traditions in various world contexts and lessons derived from the Holocaust (Shoah) and other genocides, the JCST academic program helps educators:

Our academic program offers educators the opportunity to pursue advanced studies through coursework and independent research that can lead to either a Certificate or Master of Arts in Jewish-Christian Studies.

Visit JCST’s website for an overview of the master’s program, including admissions and degree requirements and full curricula.

Annual Teachers Study Day
In addition to our master degree and certificate programs, we also host an annual Teachers Study Day every Spring semester at Seton Hall University. This professional study day highlights a particular aspect of the Holocaust and features both lectures and pedagogical workshops led by scholars and specialists in the field.

Teacher Study Days are specifically designed to assist educators in advancing or further developing their expertise in the area of Holocaust and genocide education.  Study days are offered free of charge, fulfill the New Jersey legislative mandate that all students (K-12) learn about the Holocaust and other genocides and offer five professional development credit hours to participating educators.

For more information or to register for the next Teachers Study Day, please contact Jay Wolferman at jay.wolferman@shu.edu or (973) 761-9751.

Educators who pursue a Certificate or Master of Arts in Jewish-Christian Studies at Seton Hall University and need financial assistance should contact the Sister Rose Thering Fund or the Institute of Judaeo-Christian Studies regarding funding. Because there are a limited number of scholarships and grants that can be awarded each semester, educators are encouraged to apply early.

To apply for funding, please visit the SRTF online at or contact Yolanda Sheffield Williams at (973) 761-9006 or srtf@shu.edu. The JCST program offers a convenient schedule of courses in the late afternoon and evening for busy educators who work during the day.

JCST courses explore the biblical-traditional sources and the relationship between Jews and Christians through the ages, providing a critical analysis of the values and resources deriving from each group in historical and cultural perspectives. Studies therefore focus on the interdisciplinary study of sacred texts in their historical and social world context and utilize critical methods to cultivate honest and in-depth analyses of the individuals and communities that produced them.

Core courses and electives that will enhance educators’ lessons and their classroom teachings about the Holocaust, genocide studies and interfaith relations include:

JCST 6001 Christian-Jewish Encounter
This course provides a historical review of Christian origins and Jewish-Christian relations. The heritage of Christian faith and practice that draws upon Jewish sources is examined as are the Second Vatican Council’s Declaration on Non-Christian Religions and other pertinent documents and the tasks and challenges for the coming decades. 3 credits

JCST 6015 Cross Cultural Analysis
Examination of social science models for studying the circum-Mediterranean world as the context for Jewish/Christian symbols and values; comparative study of Jews and Christians as distinct but related traditions in various social world contexts; the causes and effects of anti-Semitism; impact of individualism on Judaism and Christianity in a pluralistic society. 3 credits

JCST 6016 Values for a Pluralistic Society
A study of pluralism as a system along with its concomitant social values: civil rights and responsibilities, individualism and diversity, separation of church and state, community building and prejudice reduction. Deriving resources from a cross-cultural study of Jewish and Christian sources, the course will examine various societal models for values formation and practical guides for communicating values in a pluralistic socio-religious setting. 3 credits

JCST 6017 Jewish-Christian Foundations for Social Service
This course will examine the biblical and theological foundations in Judaism and Christianity for promoting social services. It will study notable examples of such services through history and explore various agencies today that continue this tradition. The focus of the course will be on an understanding of the rationale as well as a motivational base for responding to social needs. The course is particularly suited to teachers seeking to foster social consciousness among students in public, private and parochial schools. 3 credits

JCST 6018 Catholic-Jewish Dialogue on the Holocaust: A Catholic Perspective
A critical assessment of facts, issues and attitudes affecting Catholic-Jewish interfaith dialogue on the Holocaust.  3 credits Note: this course is cross-listed as CAST 3020 and CORE 3759, in the Department of Catholic Studies and the University Core Curriculum respectively.

JCST 6029 The Holocaust:
History and Interpretation Examines the uniqueness of the tragedy; the historical background of anti-Semitism and racism (Gobineau and H.S. Chamberlain); the manner and method of genocide (boycott, burning of synagogues, concentration camps and gas chambers); those involved and the “onlookers;” Jewish and Christian reactions to the moral and theological issues; literature concerning the Holocaust; and implications for Jewish-Christian dialogue. 3 credits

JCST 7036 Peace and War in Bible and Jewish Tradition
Review of biblical tradition (including New Testament) and rabbinic literature (such as Pereq Hashalom) on the dynamic meaning and application of peace in the transpersonal and interpersonal realms. Study of war and violence and the vision of universal peace in Jewish thought, from early times to the modern period. 3 credits

JCST 7047 Philosophical Perspectives on the Holocaust
This course seeks to engage students in a critical consideration of the moral, religious and theological implications of the Holocaust. This course will start with the classic positions of Fackenheim, Greenberg, Berkovits and Rubenstein. It will then move to the thought of the last two decades, incorporating both Jewish and Christian thinkers, including Levinas, Hauerwas, Tracy, and Jonas. Topics covered will include challenges to religion, lessons for preventing future genocide, the possibility for forgiveness, and the need for ethics and bioethics. 3 credits

CST 7570 Modern Jewish Ethics
This course analyzes the basic principles of Jewish ethics and their applications to contemporary Jewish issues. The course will start with rabbinic and medieval texts and then spend most of the class time on contemporary Jewish approaches to ethics, including those of Elliott Dorff, Walter Wurzburger, Jonathan Sachs, Aharon Lichtenstein, Eugene Borowitz and Emmanuel Levinas. Topics discussed will include law and ethics, human rights, economic justice, global ethics, Jewish virtues and values, Tikkun Olam, and differences from Christian ethics and kindness toward others. 3 credits

JCST 7576 Personal Rights & Responsibilities for a Just Society
This course will address issues in urban schools that undermine personal rights and responsibilities such as bullying and coercive gang practices (based on such factors as race, gender, sexual orientation, ethnicity, religion, social class, or locality). In light of Holocaust and Genocide studies, this course will apply remedies that have been tested and proven effective for raising critical awareness of causes and effects of destructive social behavior. It will develop a curriculum to engender personal responsibility for building an inclusive social order necessary for a just society. The outcomes of the course will be tailored teaching units for confronting destructive group practices and for building models that promote personal responsibility and leadership. 3 credits

For a listing of all courses in the JCST program, please visit JCST’s curriculum page.

To register or learn more about JCST programs, contact the Reverend Dr. Lawrence Frizzell at lawrence.frizzell@shu.edu or (973) 761-9751.