CNBC Contributor and Historian to Speak on J.F.K. Tax Cuts 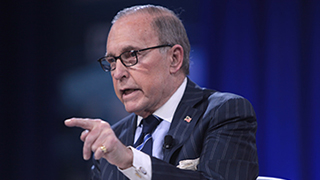 CNBC senior contributor and nationally syndicated radio host Larry Kudlow and historian and Forbes online columnist Brian Domitrovic will deliver a lecture, "The John F. Kennedy Tax Cut, Civil Rights, and the Lost Prospects for Peace in the 1960s", at 5 p.m. on Thursday, February 15, 2018 in the Nursing Amphitheater (NU 113). The public talk, which is part of the President's Advisory Group Distinguished Lecture Series at Seton Hall, is being sponsored by the Department of History and the History Club. After the lecture, Kudlow and Domitrovic will sign copies of their new book: J.F.K. and the Reagan Revolution: A Secret History of American Prosperity.

According to Kudlow and Domitrovic, the John F. Kennedy tax cut was one of the two "big bills" that the 35th president put before Congress. For all his initiatives in space, foreign aid, health care, and unions, J.F.K. considered the two most far-reaching of his proposals his tax cut and his civil rights bills. He introduced both bills in the flush of his mature presidency in 1963, and both were signed into law by his successor, Lyndon Johnson, in 1964, as a testament to the vision and priorities of the slain leader.

As Kennedy introduced his bill in 1963, he realized that the economic growth that would flow from the tax cut would be the solvent for the nation's biting civil rights problem. With great economic growth and the decline of structural unemployment, unions especially would no longer fear the gaining of jobs by African-Americans. Segregationist impulses would be reduced to the narrow ranks of the true believers, and legislation beyond the civil rights act would become unnecessary as Americans of all types would welcome each other in the context of a booming prosperity.

The intimate connection between J.F.K.'s tax cut and civil rights bills has long been understood by presidential archivists. Now it stands revealed in history by Kudlow and Domitrovic in their new book J.F.K. and the Reagan Revolution. Further implications involve Lyndon Johnson's tragic lack of understanding of the tax cut. Unlike Kennedy, believing that the tax cut would have only a small, temporary benefit, L.B.J. thought jobs programs—which took the form of both the welfare state and the Vietnam draft—were necessary in the latter 1960s because of structural unemployment. Kudlow and Domitrovic argue that had Kennedy lived it is highly likely that he would have wanted to see his tax cut bear full fruit in the context of a prosperous nation at peace with itself at home and with all nations abroad.