Eliot Borenstein is a Professor of Russian and Slavic Studies, Collegiate Professor at New York University, and Senior Academic Convenor for the Global Network. Educated at Oberlin College (B.A., 1988) and the University of Wisconsin, Madison (M.A., 1989, Ph.D., 1993), Professor Borenstein was an Assistant Professor at the University of Virginia (1993-95) before taking an appointment at NYU in 1995. He is the author of "Men without Women: Masculinity and Revolution in Russian Fiction, 1917-1929" (Duke UP, 2000) and "Overkill: Sex Violence, and Russian Popular Culture after 1991" (Cornell UP, 2008). His new book, "Plots against Russia: Conspiracy and Fantasy after Socialism" was published by Cornell University Press in 2019.

Praise for "Plots against Russia":
"In this original and timely assessment of cultural expressions of paranoia in contemporary Russia, Eliot Borenstein samples popular fiction, movies, television shows, public political pronouncements, internet discussions, blogs, and religious tracts to build a sense of the deep historical and cultural roots of konspirologiia that run through Russian life. Plots against Russia reveals through dramatic and exciting storytelling that conspiracy and melodrama are entirely equal-opportunity in modern Russia, manifesting themselves among both pro-Putin elites and his political opposition. As Borenstein shows, this paranoid fantasy until recently characterized only the marginal and the irrelevant. Now, through its embodiment in pop culture, the expressions of a conspiratorial worldview are seen everywhere. "Plots against Russia" is an important contribution to the fields of Russian literary and cultural studies from one of its preeminent voices." -- Cornell University Press 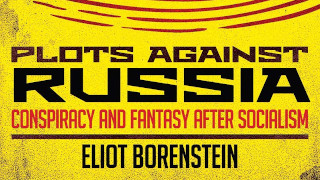 "He offers close readings of how conspiracy manifests itself in Russian popular as well as political culture. In doing so, he pushes our understanding of how conspiracy has transcended the paranoid fringe and become widely accepted as credible." -- East-West Review

"A study that both answers a number of questions about the post-Soviet Russian public sphere and signals other possible ways to interrogate its workings. As such, it should be read by all specialists in contemporary Russian culture... Borenstein's text is so well written and entertaining that it will easily hold the attention of undergraduate students of post-Soviet Russian culture, history, and politics." -- The Russian Review

"Borenstein (NYU) has written a fascinating book with self-awareness and humility, which only lends greater credibility to his arguments overall" -- Choice

Professor Borenstein's presentation is co-sponsored by the Russian and East European Program, the Department of History, and the Slavic Club.

The event is free and open to the public via Microsoft Teams.