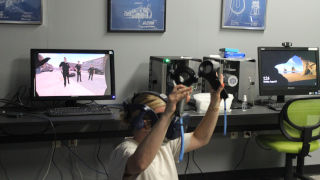 Megan O'Brien, a recent graduate of the SHU MSW program and assistant director of the Community Care & Justice Program

As part of his work with the South Orange Community Care & Justice program, Social Work Professor Juan Rios hosted a virtual reality showcase and preview for professors, students and local police at Space 154, the makerspace that is a part of the Teaching, Learning and Technology Center at the University.

The Community Care & Justice initiative is a collaboration between Seton Hall, South Orange and Essex County designed to "reimagine" traditional models of law enforcement through the larger lens of public safety and wellness with a greater emphasis on crisis prevention. The program is led by Trustee Donna Coallier, chair of the Village's Health and Public Safety Committee, and Professor Juan Rios, Director of Seton Hall University's Master of Social Work program. 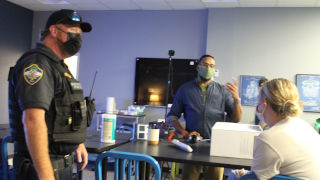 At the screening, Professor Rios featured the virtual reality program "1000 Cut Journey," which "uses immersive virtual reality (IVR) to create a 'virtual shoes' experience through which a participant can viscerally embody an avatar who encounters various forms of racism," according to the Cogburn Research Group of the Columbia University School of Social Work, which developed the program along with Stanford University's Virtual Human Interaction Lab.

In "1000 Cuts," participants embody a Black male, Michael Sterling, experiencing racism as a small child through disciplinary action in the classroom, as an adolescent encountering the police, and as a young adult experiencing workplace discrimination.

"This virtual reality program is a tool intended to increase empathy and decrease implicit bias," said Rios. "For social workers and police officers, empathy can be a core component of successful case and incident management. By bringing this group together today we received substantive, positive feedback on its efficacy for both students and first responders. We'll be utilizing this program going forward."

Trustee Coallier added, "We need to deploy every tool at our disposal to address implicit bias. This technology coupled with understanding the real experiences of our community members shows tremendous promise in helping build more empathy on an individual, deeply personal level. An important tool in anyone’s arsenal and one we plan to make great use of through Community Care & Justice." 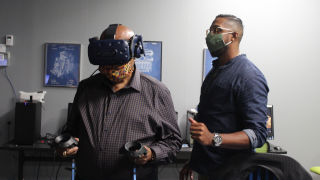 Participating in the preview were Rev. Dr. Forrest Pritchett, director of The Martin Luther King Leadership Program at Seton Hall; Sergeant John Niedzinski of the South Orange Police Department; Megan O'Brien, a recent graduate of the SHU MSW program and assistant director of the Community Care & Justice Program; Brothers Rafael Vargas '16 and Reegan Lidet of the Salesians of Don Bosco, who have both just entered the Masters of Social Work program at Seton Hall.

The preview was facilitated by Alex Pilaia of TLTC.

Reverend Dr. Pritchett was the first to undergo the "1000 Cut Journey" and thought the experience could prove helpful for some. "I’ve lived this in real life, 3D," he said. "So, in some ways the virtual reality experience felt one dimensional. But for some people I think this tool can be very useful: one dimension is better than none, and a step in the right direction."

Sergeant John Niedzinski, a self-described "weathered officer" who, as a supervisor, helps train SOPD officers, agreed. "I can see this being useful for some officers. It allows you in a sense to walk a mile in someone else's shoes and I think it can give some officers, especially younger officers, a better grounding in the perspective and experience of some of our community members."

Sergeant Niedzinski also noted that he thought the technology could be extremely useful for members of the community if a program could be devised to allow people to experience what it is like to be a police officer involved in a traffic stop or responding to a domestic violence call. "It would be great for people to have a better understanding of what it's like to be a police officer – just as it would be great for police officers to have a better idea of what it’s like on the other side of the dispatch."

Brother Reegan Ledet is a graduate of the University of North Texas who recently took his first vows as a Salesian of Don Bosco, a worldwide organization founded by St. John Bosco which is the second largest Catholic religious order in the world.

He comes to brotherhood and his desire to become a social worker after having taught high school. "It was distressing, off-putting and very confusing to me," said Ledet, who is white. "When it started out in what I imagine was either a pre-k or kindergarden class I couldn’t understand why I was left playing alone. And when I smiled and put out my hand to shake and said 'Hi, I'm Michael,' no one responded. I was just left there hanging – and alone – asking 'Why won’t you shake my hand.' I actually had a physical response – a little bit of a chill."

Ledet then asked, "How many times does a young boy hold out his hand, rejected, before he just stops trying?"

Rafael Vargas, who has just taken his final vows as a Salesian Brother, had a similar experience. "I was confused," he said. "I grew up in a mixed community but have never been stopped by a cop. I didn’t know what to do when the police officers in the virtual program told me to stop and get down on the ground. It was intimidating. I felt like I had no voice."