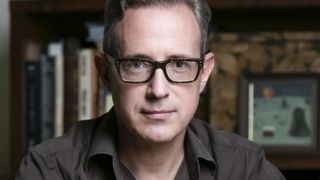 Patrick Ryan is the author of the acclaimed short story collection The Dream Life of Astronauts (named one the Best Books of the Year by the St. Louis Times-Dispatch, LitHub, Refinery 29, and Electric Literature) and Send Me (a finalist for the Center for Fiction's First Novel Prize). He is also the author of three novels for young adults. His fiction has appeared in many literary journals and has been anthologized in The Best American Short Stories. His nonfiction has been published in Tales of Two Cities, Granta, and other anthologies. A recipient of fellowships from the MacDowell Colony and the National Endowment for the Arts, Ryan is the former associate editor of Granta and the editor-in-chief of One Story.

Ryan will speak about editing and publishing One Story, a leading literary magazine. Established in 2002 and based in Brooklyn, New York, One Story has one of the highest circulations of any literary magazine in the country, and many stories published in the magazine are recognized by The Best American Short Stories and other anthologies.

The event is free and open to the public. All are welcome. Register by clicking here »