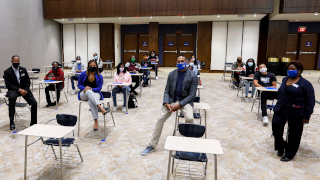 Following the successful conclusion of the East Orange Virtual Summer Work Experience Program, a cohort of approximately 20 students and parents visited Seton Hall to experience campus and gain a better idea of the higher education opportunities that await them. The students were accompanied by East Orange Mayor Ted R. Green, members of his administration, and author, educator and entrepreneur Jamila T. Davis.

Assembled on the campus green, Cooper-Gibson told the students that they should consider this "just the beginning" and challenged them to see themselves "as role models for younger siblings and members of their community." She added, "And don't ever forget, you belong here," gesturing to the campus. "Whether it be Seton Hall or some other school (though we hope it will be Seton Hall), the University exists for you – and I am here to do everything I can to make that possible." 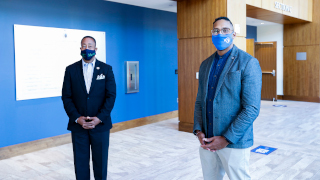 The East Orange Summer Work Experience Program ran for 20 hours per week from July 13 to August 21 and offered six modules for its 300 plus students: OSHA 30 for Construction and Labor; Media/Podcast; Music Development; Personal Care for Hair, Makeup, etc.; Web/Graphic Design; and Wellness and Physical Fitness.

Under the direction of Mayor Green and Professor Juan Rios, director of the Department of Social Work at Seton Hall University, the program was offered through V.I.P. Online Academy, which was started in response to COVID-19 by Jamila T. Davis in partnership with civil rights activist Tamika Mallory and Love and Hip Hop's Yandy Smith.

"This collaboration with Seton Hall allowed our youth to not only gain marketable skills and employment, but also new insight into the opportunities of higher education and how to use their voices to fight for social justice," said Mayor Green. "Some of our most prominent civil rights organizers like the late John Lewis and Stokely Carmichael began their activism as young students. The City of East Orange looks forward to an ongoing partnership with the University as we work together to build the leaders of a better tomorrow."

In addition to stressing job-related and entrepreneurial skills, the program also included regular lessons on civic engagement and social justice. The students took those lessons and incorporated them in organizing a student-led peaceful protest demanding justice and the release of unedited video in the case of Maurice Gordon, an unarmed black man who was killed by a New Jersey State Police officer on the Garden State Parkway. The protest was featured in media outlets throughout the United States including The New York Times, The Washington Post, Houston Chronicle, NJ.com and the San Francisco Chronicle, and internationally in Yahoo UK, the Taiwan News and Nigeria Trending. 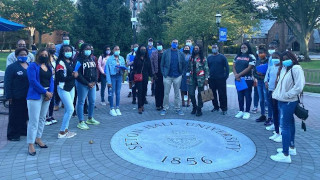 Students were paid $10 per hour for their participation in the program, and upon its completion, a number of students were offered employment as brand ambassadors and independent distribution stylists by the Janet Collection, a leading innovator in the hair care business headquartered in Moonachie, New Jersey; and by Blackstone 360, a Newark-based vertically integrated developer, construction and rental management firm that is in the process of building its fifth luxury high-rise in East Orange.

"This day is about possibilities and outcomes," said Jamila Davis. "These students devoted themselves to this program and now have a chance to see where all that hard work can lead them. Education is power, and for many of these students, college is the next and best step forward. The City of East Orange has a wealth of untapped intellectual capital among its youth, and this program is just the start of realizing its contribution to the greater good."

In addition to its emphasis on employment, entrepreneurship and social justice, the program also contained an academic component which detailed the benefits of higher education and job opportunities within the academic world – presentations often highlighted by the narratives of faculty members of color at Seton Hall who have "beaten the odds" to take their place in the academic world.

"This program gave us a chance to reach into the community, to our neighbors and the next generation of great minds," said Professor Rios. "In many ways, this summer program became a transformative space for these young adults who, if they attend college, will by and large be the first or second person in their families to do so. This introduction to campus is the next step in that process and a prelude to the unfolding of possibilities within these individual students and the wider community. Seton Hall has always been a home for first-generation college students— and today we introduced these students to what could be their home away from home."

On campus, the East Orange youth were given a tour by Seton Hall students and heard from representatives from EOP and the Director of the Upward Bound Program, Marva Cole-Friday. Upward Bound at Seton Hall offers academic enrichment, financial planning and SAT and ACT prep classes for area students in underserved communities in Essex County, including those who attend East Orange High School. The program, which is free, offers a "Saturday Academy" during the school year and a summer program that features classes daily.

Noting that many of the seniors will be among the first college applicants who can write about the impact of the pandemic on their journey to college, Cole-Friday told the students, "This is your opportunity. You have learned your resilience during Covid and now is the time to use that strength to invest in yourself – and your future."

After the presentations Cole-Friday was met by a crowd of students who, "seeing this only as a beginning," asked for applications to the Upward Bound program.