The Badillo Lab is invigorating Seton Hall's presence in the Synthetic Organic Community! The Badillo Lab recently received a $10,000 SEED grant from the Sloan Scholars Mentoring Network with funds coming from the Alfred P. Sloan Foundation. The grant supports the group's research on developing photoacid catalysis for organic synthesis. The group uses visible light to access excited state molecules – up to a million times more acidic than in their ground state – to enable previously inactive molecules to function as catalysts for new reactions. These photoactivated catalytic processes consume only photons, making photoacid catalysis a greener option to alternative methods.

Their work titled "Photoacid-Catalyzed Friedel−Crafts Arylation of Carbonyls" was recently published in Organic Letters (Org. Lett. 2019, 21, 21, 8528-8532, 10.1021/acs.orglett.9b02841). "We are extremely grateful to the SSMN and the Sloan Foundation for supporting our work," says Dr. Joseph Badillo (Assistant Professor, Department of Chemistry and Biochemistry). Dr. Badillo joined the faculty at Seton Hall in 2017, after completing his postdoctoral studies at Princeton University in the laboratory of Professor Dave MacMillan. Zena Salem (B.S. Biology, Chemistry minor), who is first author on the article, was the recipient of an Undergraduate Summer Research Fellowship from the New Jersey Space Grant Consortium (NJSGC) and NASA. Zena expressed, "Having the support from the NJSGC and NASA allowed me to focus on research!" 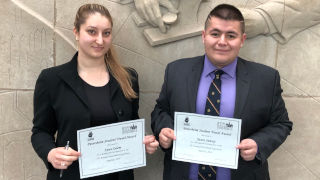 Representing the Badillo Lab, Zena Salem and Jason Saway (Ph.D. Chemistry) won best undergraduate and graduate poster presentation, respectively, at the 2019 Department of Chemistry and Biochemistry Petersheim Academic Exposition. Badillo's group also recently traveled to the University of Maryland to present their work at the 2019 Alliance for Diversity in Science and Engineering (ADSE) 8th Annual Young Research Conference. Zena Salem won first place speaker award for best oral presentation, "Zena was the only undergraduate speaking with graduate students and faculty from top tier institutions, such as NYU and John Hopkins, I am extremely proud of her accomplishments, she has a bright future!" says Dr. Badillo. The ADSE's mission is to increase the participation of underrepresented groups in academia, industry, and government. Dr. Badillo asserts, "I have a long-standing interest in promoting diversity in STEM."

Furthermore, Desiree Harris (B.S. Biochemistry 2019) represented Seton Hall and the Badillo Lab at the 2019 National Organization for the Professional Advancement of Black Chemists and Chemical Engineers (NOBCChE) National Conference in St. Louis, MO. Desiree expressed her excitement after returning from the conference stating, "NOBCChE was eye-opening! It was an honor to be amongst a cadre of such distinguished professionals in the field." Darwin Glynn (B.S. Biology, Chemistry minor) from the lab was awarded a 2019 Independent College Fund of New Jersey (ICFNJ) Scholarship and an NJSGC and NASA Fellowship. Sam Chalet (B.S. Chemistry and Biology), received a Claire Boothe Luce (CBL) Mid-Career Award and a CBL Summer Research Award. Darwin, Sam, and Zena represented Seton Hall at the 2019 ICFNJ Undergraduate Research Symposium at the Liberty Science Center in Jersey City. Finally, Darwin and Zena represented SHU at the 13th annual William Paterson Undergraduate Research Symposium. "I'm proud of my students and all their hard work, the accolades they are receiving are well deserved!" said Dr. Badillo. "Having Dr. Badillo as a mentor has opened my eyes to research avenues I never imagined, and his mentorship is the reason our group is so productive. We are looking forward to another successful year in 2020!" said Jason.