Anthropology Professor Featured on PBS, 'Secrets of the Dead' 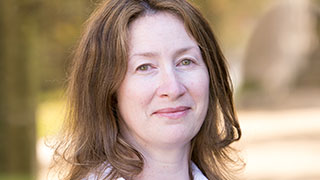 Anthropology Professor Rhonda Quinn is featured in a PBS documentary that used a team of historians and forensic scientists to recreate the life of an African American woman who died in the first half of the 19th century — before the Civil War and the federal abolition of slavery. The woman, dubbed "The Woman in the Iron Coffin," was uncovered by construction workers in Elmhurst, Queens in 2011.

The iron coffin she was buried in has been described as "elaborate and expensive" and was designed to be airtight, which helped to preserve her remains so well that initial witnesses at first believed they had stumbled upon a recent homicide.

Coupled with modern forensic imaging tools, because the body was so well preserved researchers had an almost unprecedented ability to recreate the woman's life – and her death – through non-invasive autopsy, isotope analysis and historical records.

Believed to have been free and "no older than 30," researchers found that "The Woman in the Iron Coffin" died of smallpox.

Because that disease was largely eradicated from the face of the earth roughly 50 years ago (and long before the advent of the new autopsy imaging software) researchers were able to observe the virus within a human being essentially in situ. The researchers were surprised to find that the virus had taken hold and was visible not only throughout her body, but also on the protective sheathing of her brain, an important discovery.

In recreating the woman's life, Professor Rhonda Quinn (31:30), a biological anthropologist, used geo-chemistry to help place her as native to the New York area — a finding that was supported by (and in turn supported) other historical data.

Through analysis of various isotopic and elemental compositions of one tooth and a hair sample, Professor Quinn was able to determine that the woman was: "locally born, had a diet comparable to New York City residents and to regional contemporary free Black populations, but had high lead levels— which could have caused some health issues, but also revealed that she was in proximity to wealth goods."

Using additional data about current New Yorker dietic profile, Professor Quinn concluded for the lead researcher on the case, forensic archaeologist Scott Warnasch, that "She looks like other New Yorkers." Ultimately, her "geochemical profile" of the Woman in the Iron Coffin bolstered archival-based evidence of her identity. As noted by the lead researcher, "one of the best ways we can determine the origins of a person – where they were born – is isotope analysis."

Professor Quinn, who is the director of the Anthropological Isotope Laboratory at Seton Hall, is a noted expert in the field and was part of the team in Kenya that made the "game-changing" discovery of the oldest stone tools ever found.

In addition to the geochemical profile, historical records showed that the body had been found on a plot of land that was owned by the United African Society of Newton and used as a cemetery connected to the African Church at Dutch Lane. Though the area is now called "Elmhurst," Newtown, was home to a substantial community of former slaves and free-born African Americans. Census data from 1850 allowed the research team to further pinpoint the identity of "The Woman in the Iron Coffin" and a forensic imaging specialist was able to reconstruct a likeness of her face. The woman, believed to be Martha Peterson, lived with the next-door neighbor and business partner of the manufacturer of the coffin.

Honored as one of their own, Ms. Peterson was again buried by members of St. Mark African Methodist Episcopal — which traces its history directly to the United African Society and the church at Dutch Lane.

Going forward, anthropology student Monet Watson will be contributing to the detailed interpretation of the results and will co-author a presentation at the annual conference of the Society of American Archaeology this spring. Afterward, she and Professor Quinn plan to publish their findings in a peer-reviewed journal.

Presented on PBS stations across America, Secrets of the Dead: The Woman in the Iron Coffin, can also be found online on PBS's web site.