"Meet Her at the Gate," a reentry program for women returning from incarceration to Essex County, won first prize in the Shark Tank-style competition for social services held at Seton Hall University. The competition was part of an eight-week Social Justice Certificate program which was a collaboration between the Center for Community Research and Engagement at Seton Hall, the South Orange Community Care & Justice program and Newark's Office of Violence Prevention and Trauma Recovery. 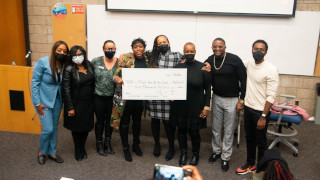 Spearheaded by Dr. Jamila T. Davis as the Practitioner in Residence for the Center for Community Research and Engagement, the Social Justice Certificate program brought community members together to learn from experts, each other and a curriculum that historicizes the context of the Black and urban experience in America.

Among the first of its kind in the nation, the program was co-led by Seton Hall Professor Juan Rios and featured presentations by Until Freedom's Angelo Pinto, Esq.; Seton Hall Professors Kelly Harris and Dean Georita M. Frierson of the College of Arts and Sciences; Professor Bahiyyah Muhammed of Howard University; Yale Professor of Public Health Ijeoma Opara; LaKeesha Eure, director of Newark's Office of Violence Prevention and Trauma Recovery; and Until Freedom's Tamika Mallory, Mysonne Linen and Linda Sarsour.

In addition to history and theories of social justice, the Social Justice Certificate program curriculum emphasized "actionable knowledge," and sought to empower its participants as "changemakers" in search of equity and community well being.

Participants in the class grouped in cohorts who dedicated themselves to solving a particular problem within their community. In the penultimate class Newark Mayor Ras Baraka helped the students prepare for their presentations before the judges and a crowd that would include the Acting Commissioner of the New Jersey Department of Education, alumna Angelica Allen-McMillan; the "Turnaround Principal," alumnus Gemar Mills; LaDonna Johns, manager of the East Orange Mayor's Office of Employment and Training; former East Orange Councilwoman/New Jersey State Assemblywoman and alumna Quilla Talmadge; Vice President of the Newark Board of Education, Flohisha Johnson; Interim Dean of the College of Education and Human Services Joseph J. Martinelli; and Amy Newcomb of the Office of the Provost at Seton Hall. 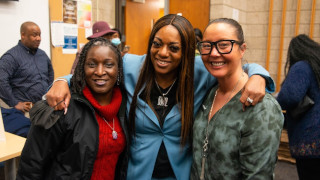 As the competition's winners, Lakiesha Smith, Minyarn Johnson and Cass Severe received a seed money grant of $5,000 to activate their program, "Meet Her at the Gate." A member of the audience, Nikkia McClain, the owner of Tene Nicole Public Relations, contributed an additional $1,000 to that total.

Cass Severe, who grew up "affluent" in South Orange in the midst of "family trauma that went unaddressed," led the winning group. Despite the unaddressed trauma, she noted that she has "taken accountability for my bad choices and decisions" that led to her incarceration years later and wanted to help others with similar struggles. "When I got out, no one was really there for me to help me readjust," she said. "There are a lot of programs for men, but society is not kind to women who have been incarcerated. And since I got out," she began crying, "this is really the first time the world has shown faith in me. And now, we want to show others that same love and commitment when we Meet Her at the Gate."

The judges, Village President Sheena Collum of South Orange; Rashawn Davis, associate director of the Racial Justice Fund at Change.org; Andre Mitchell, the founder and executive director of Man Up!, Inc.; and Ann Marie Adamson-Serieux, strategic project director for EmblemHealth, were unanimous in their decision.

"South Orange and Community Care & Justice are proud to sponsor this program," said Village President Collum. "This is exactly the kind of work we need to be doing here and throughout Essex County and I thank Essex County Executive Joseph N. DiVincenzo, the Essex County Board of Commissioners and Seton Hall University for their support, making all this and more possible."

Adamson-Serieux was equally impressed, however, with another project, "Teach Me Chemistry," and committed to independently funding the initiative with another $5,000.

The brainchild of Ysantae Grant, a 16 year-old high school student at the Academy for Scholarship and Entrepreneurship in the Bronx, NY., "Teach Me Chemistry" fills the unmet need for science lab equipment at school. Project team member and Newark School Board President Dawn Haynes presented the pitch to the judges and explained that, like in many charter schools throughout New York City, Grant’s school shares the space at a former public high school with three other charter schools. A four-story building, each floor is dedicated to a separate school. Unfortunately, there are no science labs on the floor that the Academy for Scholarship and Entrepreneurship inhabits—and scheduling lab time with other schools on other floors is a "logistical nightmare." "Teach Me Chemistry" will bring an outfitted science lab – complete with test tubes, Bunsen burners, safety goggles and other tools of the trade – into classes on a "Science Cart."

"Students need to be able to conduct experiments to experience the wonders of science and chemistry," said Adamson-Serieux. "This opportunity was just too good to pass up. It is elegant in its simplicity, cost-effective, and should be relatively easy to implement. EmblemHealth is proud to sponsor 'Teach Me Chemistry' and looks forward to this program as a pilot – with the hope that we can help bring meaningful access to laboratory equipment and real science education to students in need – throughout the City."

"This is one more example that shows 'the people closest to the problem are also closest to the solution,' said Davis. "A science cart for students without a science lab is a no brainer. Education experts everywhere, but it took a 16 year-old girl to figure it out – and this program to make it a reality."

Other participant proposals included a campaign against gender-based violence, an initiative that utilizes video storytelling and social media to emphasize the humanity of police officers and members of the community, a program designed to bring healthy food choices to those who live in a "food desert," a program to keep children connected to their incarcerated parent, a financial literacy project and a gun violence prevention campaign.

"The Center for Community Research and Engagement has been marshalling Seton Hall’s resources to 'develop creative solutions to community problems' for nearly 25 years," said Professor Roseanne Mirabella, one of the Center's founding directors. "Much of this work at the University stems from then-President Fahy's call for service and 'relevance,' and I believe with this newest programming we have cultivated relevance and community impact like never before. Now we need to put together strategic partnerships to fund round two."