Major League Baseball All-Star Alex Rodriguez came to Seton Hall to speak with students about his career on the field and off as an entrepreneur, sports analyst, philanthropist and professional sports team owner.

Sponsored by Seton Hall's Center for Sports Media in the College of Communication and the Arts as part of its Speaker Series, Rodriguez was joined on stage by former ESPN broadcaster Bob Ley and Bardia Shah-Rais, vice president of production at Fox Sports. Both Ley and Shah-Rais are alumni of Seton Hall.

In setting the stage for the event, B.J Schecter, Professional-in-Residence in Communication and the Arts and former Sports Illustrated Executive Editor noted that he come to Seton Hall around five years ago with a primary goal: "to build a transformative Center for Sports Media to educate – and more importantly prepare – our students for the next wave of media."

Rodriguez was introduced to the crowd of a few hundred students, professors, alumnus and administrators through a video montage prepared, scripted and produced by Seton Hall CommArts students and narrated by Michael Kay, the veteran announcer with whom Rodriguez will be teaming this season on "KayRod Cast," ESPN's alternate broadcast of Sunday Night Baseball. Rodriguez took the stage saying, "That video was awesome. I want to use that video when I travel the globe giving speeches."

In a wide-ranging conversation that followed and included questions from students and faculty, Rodriguez talked about his "first love" baseball, marketing platforms, entrepreneurship and having an ownership stake in a professional sports team.

In an article on the event in NJ Monthly, "Alex Rodriguez Talks Post-Yankees Life at Seton Hall Event," Bob Ley, whose lead gift founded the Center for Sports Media at Seton Hall, "pointed out that Rodriguez's visit didn't cost Seton Hall a penny. The long-time 'Outside the Lines' host also noted that Rodriguez came prepared, asking prep questions about The Hall."

All Great Things Start Off Small

Rodriguez recounted for the audience what it was like to start off as a child whose family could sometimes not afford to pay the rent in full, and to wind up as a real estate investor and landlord himself. Real estate was his first foothold in the business world.  Rodriguez said regarding his business success people always ask "How do I get that big?" Rodriguez said that he was "process driven" and shared with students his belief that "all great things start off small."

Rodriguez said he was around aged 12 when he prayed that God would "please slow down time for my mother so she can pay the rent," which was $650 per month. He said he added in the prayer that he would some day like to "change places with the landlord." Roughly ten years later, lacking cash on hand,  he sold two watches he received as part of his signing bonus and did some autograph appearances to raise the $48,000 down payment he needed for the opportunity to own his first duplex rental property. Soon thereafter he sold that property for double his $250,000 purchase price and bought an eight-plex. Then came 60 units. And now, "we grew that portfolio to over 15,000 apartment units in 14 states throughout the Southeast." As CEO of A.Rod Corp, Rodriguez also holds a venture capital firm and owns a substantial partial interest in the NBA's Minnesota Timberwolves.

With regard to baseball, Rodriguez said he thought owning an NBA team is a better investment than owning a Major League Baseball team. "If you look at the NBA…they're doing all the things that baseball used to do. Basketball is a global sport, with tremendous leadership… and it's quick." He added, "If you guys come to a Timberwolves game – and I hope you do, shameless plug – we sit down at 7:05, tip-off. At 9:15 we're having dinner. I'm ordering my merlot with a nice steak and some fries. And it's 9:15. At 9:15 we're in the bottom of the second inning."

Along with the headlined event, Rodriguez hosted small group sessions with Seton Hall students, which included opportunities for selected students from the College of Communication and the Arts and student-athletes to discuss the interplay with media from the vantage point of an athlete and a media personality. In addition, students from Pirate Sports Network learned about media perspectives, while invited students from the Stillman School of Business and Buccino Leadership Institute cohorts discussed entrepreneurship and Rodriguez's business ventures.

In an interview after the event, Rodriguez was asked how he felt about Seton Hall ramping up its commitment through the Center for Sports Media to the next generation of students. "I love it," said Rodriguez. "Seton Hall has an incredible opportunity to be The go-to school, university, when it comes to media and broadcast. When you see what Bob Ley and Bardia and others are doing around it – the new president has a great message – I'm very bullish on Seton Hall – where they're at, and where they're going."

Filmed by the student-run Pirate Sports Network (PSN), which broadcasts many of the University's athletic events, a recording of the live stream is available here.

About the Center for Sports Media

The Center for Sports Media within the College of Communication and the Arts redefines how students are trained in media, communications, sports business, engaging with the sports community, and producing groundbreaking content through University channels and partnerships with major media outlets. Established in Fall 2021, the Center for Sports Media provides an interdisciplinary foundation for academic training and theory with practical experience pertinent to excellence in the Sports Media discipline.

You can see the entire video of the event here. 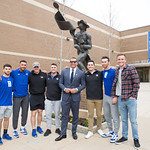 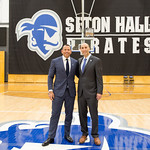 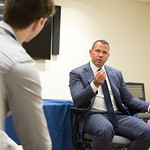 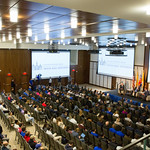 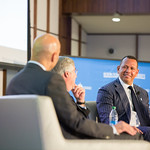 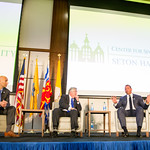