The American Identity: Crisis at the Border

As a leading Catholic University, Seton Hall is committed to cultivating great minds by engaging with the great conversations and challenges of our time. The Great Minds Dialogues focus on academic freedom and civil discourse -- where all are encouraged to share ideas, strive to be understood and see the world as others see it. 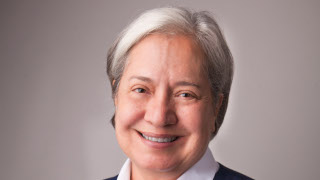 The second event in this series, which took place on Thursday, February 6, featured Catholic Charities' Sister Norma Pimentel. Drawing on her many years of leadership in the Church, as well as her extensive work with immigrant and refugee families, Sr. Norma tackled the ethical dilemmas of our current immigration policies, with particular emphasis on the effects of family separation at the US Mexican border, the lived experience of refugee families, as well as the challenges of the politicization of this vulnerable population. As one of the nation’s strongest champions of immigrants, Sr. Norma asked the difficult question about social responsibility and through anecdotes, addressed the multi-dimensional issues related to the crisis at the border.
NEWS STORY: The American Identity -- Crisis at the Border

Thought of as the "Mother Teresa of South Texas," Sister Norma Pimentel is a sister with the Missionaries of Jesus and a licensed professional counselor. She currently serves as an executive director of Catholic Charities of the Rio Grande Valley; she oversees the charitable arm of the Diocese of Brownsville, providing oversight of the different ministries and programs in the areas of: emergency assistance, housing assistance, counseling, and pregnancy care to all four counties in the Rio Grande Valley.

Sr. Norma was instrumental in organizing community resources to respond to the surge of Central Americans seeking asylum in the United States and setting up Humanitarian Respite Centers in McAllen and Brownsville, Texas in June 2014. The shelter provided emergency relief and temporary housing for hundreds of thousands of refugees. These efforts brought Sr. Norma recognition as a recipient of the 2015 Martin Luther King, Jr. "Keep the Dream Alive" Award from Catholic Charities USA and a nomination for "Texan of the Year." In March 2015 she spoke at the UN Headquarters at the invitation of the Permanent Observer of the Holy See to the United Nations.

"It is a humanitarian issue and we must not forget that ... We must treat them with dignity and respect, to uphold them as human beings. We must find solutions that are respectful to life and to people."

During the U.S. Papal visit, Sr. Norma met with Pope Francis in New York City and presented him with one of her original paintings which depicted an immigrant mother and child. Later that same year, Our Sunday Visitor named her as one of eight Catholics in the Year, "men and women, religious and lay — who made an indelible mark in 2015.  In 2018 the University of Notre Dame presented her with the Laetare (Laytear) Medal – considered the most prestigious honor given to an American Catholic – shining a light on the remarkable lifelong faith in action of Sr. Norma.

Great Minds Dialogue: "The American Identity - Crisis at the Border"

This event was sponsored by the Office of the Provost and the Office of Mission and Ministry. A reception with light refreshments followed the Dialogue. 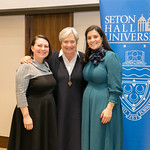 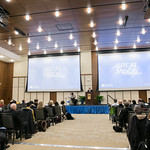 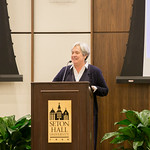 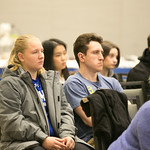 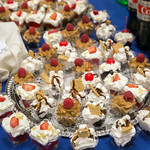 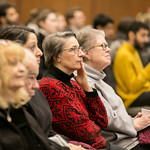 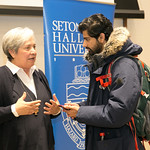 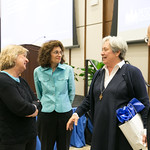 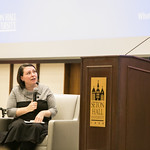 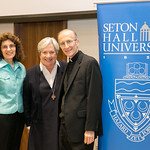 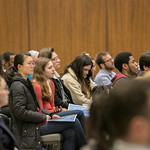 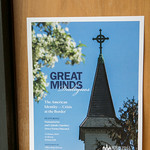