Making a Difference, One Laptop at a Time Near the southern border of Uganda is a nongovernmental organization called the Uganda Community Based Association for Women and Children Welfare (UCOBAC). Serving the needs of vulnerable women and children in priority areas, UCOBAC consists of staff and volunteers, many of whom work toward their mission using laptops that have been donated to them – from more than 7,000 miles away in South Orange, New Jersey.

Back in 2010, Andrew Simon, associate professor in the Department of Psychology, took on an action research project with UCOBAC, assisting in the development of the organization's five-year strategic plan. "During the month I was there, I came to realize that it would make an immeasurable difference to them to have laptops," says Simon. He contacted Stephen Landry, Seton Hall's chief information officer, about donating some of the University's resurfaced laptops to his UCOBAC colleagues. They started with one laptop, then shortly thereafter developed a program aiming to equip the entire organization with them. "My contacts in the Information Technology Department have been great. I'd write Paul Fisher and ask him for a small batch at a time, he would authorize it, and then Irene Wang would prepare them and tell me when they were ready for pick up," says Simon.

The donated laptops are being used in a number of ways. Some are used to train staff and volunteers, particularly those who have never been formally educated. They are also instrumental to a project that helps secure the rights of women to own land. Says Simon, "This is a problematic issue in northern Uganda. UCOBAC has been using the laptops to collect data on who owns what land legally. That shifts the possibilities for women and girls in that region."

The program appeared to be a success early on. Then one evening, it expanded in the unlikeliest of ways. 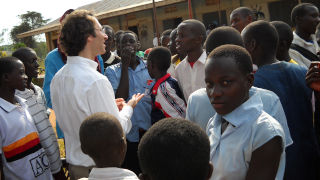 Andrew Simon has been assisting Uganda-based UCOBAC for nearly 10 years.

Simon was having dinner with friends, and he began to talk about Seton Hall's laptop donations to UCOBAC. Among those around the table was Dr. Mary Ann LoFrumento, medical director of the newborn nursery at Morristown Medical Center, head of the global health education program for the residents at Atlantic Health – and cofounder of a nonprofit organization called Hands Up for Haiti (HUFH). Striving to make a sustainable and positive impact on the health of those in northern Haiti, HUFH's employees were looking to take their program development and data collection to the next level. And to do that, they desperately needed computers.

Simon quickly got to work. With Landry's help, HUFH joined UCOBAC in reaping the benefits of the resurfaced laptops. "We have about 600 kids a year in our malnutrition program, which runs for 8-12 weeks. Every week they get weighed, and we continually monitor their progress. That's all done on these computers," says Dr. LoFrumento. They also use the laptops to collect data on each child hospitalized for treatment or surgery, as well as to keep track of their pharmaceutical inventory. "Ultimately, the laptops are what helped us grow the organization. We couldn't have afforded these computers on our own, and thus, we wouldn't have been able to effectively communicate with each other, to get our programs off the ground, to accurately collect data or to track expenses. They've really made a difference," she says. 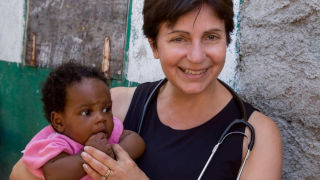 Dr. Mary Ann LoFrumento cofounded Hands Up for Haiti to improve the health of those in the northern region of the country.

Others at the University have also stepped in to use resurfaced laptops as a way to improve the lives of those in need. Between 2014 and 2015, Frank Sweigart, director of Systems Support, was involved in two servant leadership trips to Our Lady of the Sioux Parish on the Pine Ridge Indian Reservation in Oglala, South Dakota. For each of those trips, he secured 25 laptops with accessories, as well as a video projector. The group worked with Sr. Barb Bogenschutz, parish coordinator of Our Lady of the Sioux, to distribute the laptops to elementary and high school aged members of the parish community – many of whom lived quite a distance from their schools and needed a computer at home to complete assignments away from the school computer labs.

But behind every successful program is a unique set of challenges. For example, when Simon first inquired about the use of laptops at UCOBAC, he was told that years prior, UNICEF had attempted to send the organization a large shipment of them, but that the government stepped in because of the size of the shipment. There was no objection to individuals bringing in laptops on their own; officials simply opposed mass shipments of them. Thus, to abide by the government restrictions in Uganda, and to ensure that the laptops arrive safely at their respective locations, the machines have had to be delivered in person, only a few at a time. 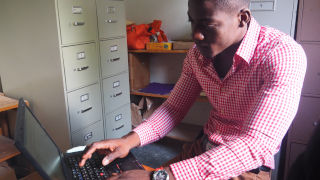 The laptops donated to Hands Up for Haiti ultimately served to expand their programs.

"This has been our biggest challenge, since it's both time-consuming and expensive for one of us, or one of them, to make the trip to deliver the computers ourselves," says Simon, who has had to think outside the box for alternative options. "Sometimes I deliver them to someone I know who's traveling to Uganda or Haiti. There's also an organization in Brooklyn called GROOTS International that supports women's projects internationally, and I've brought some to them. I've even enlisted the help of my psychology students, telling them about the project and asking them to use their connections and brainstorm ways to transport these machines." To help ease the difficulty a bit, Simon is looking into the possibility of transporting tablets to HUFH, which are lighter and smaller than laptops and would allow volunteers to deliver more of them at once.

Despite the challenges, Simon is pleased with the how the idea has progressed and the difference it has made well beyond South Orange – simply by repurposing existing University resources. "We prepare our students to think critically and be servant leaders, and at the same time, we're banding together to make contributions to these groups around the world. We're embodying what we teach."

Get involved! If you would like to help with this initiative, or know someone who might, please e-mail Andrew Simon at andrew.simon@shu.edu.