A Legion of Pirates

The past two years have been an action-packed tale of grit, partnerships, and hard work at Seton Hall University. The University recently unveiled its Rocket League and League of Legends teams and their new esports lab. A base of operations that has served them well from the launch of the program and through the current global pandemic and to the teams’ successes despite the pandemic. In November 2019, the University completed construction on a state-of-the-art computer lab and esports facility with dedicated and optimized computers for students' recreational and competitive use. Seton Hall's esports and gaming lounge is located in Jubilee Hall on the fifth floor. The center contains 33 desktop computers, 16 of which are game-ready and dedicated to gaming with Overwatch, Rocket League and League of Legends already installed, with gaming chairs, mice, keyboards and headsets and six monitors with the capability to project what's displayed on any of the 16 gaming desktops throughout the room. In the esports facility, gamers also have access to consoles: Microsoft Xbox One, Sony PlayStation 4 and Nintendo Switch. Although the facility will be used by Seton Hall's gaming teams for team practice and Big East tournaments, it is open to students at times throughout the week.

"It's about engagement and supporting our students," said Paul Fisher, the associate chief information officer and director of the Teaching, Learning and Technology Center. "It's a digital era and video gaming is a multi-billion-dollar industry that is expanding exponentially; employment prospects within and ancillary to the field are commensurate with any other booming industry and similar to those in traditional spectator sports. In addition to professional gaming, development and hardware engineering, the field is home to jobs in research, marketing, communication, broadcast and even event planning. Located between New York City and Philadelphia, Seton Hall students are ideally situated to take advantage of these opportunities – and we are dedicated to supporting them."

Since the opening of the esports facility, the teams have truly taken advantage of the opportunities, bringing home two medals for Big East Rocket League and using the facility to position themselves to face off in the Big East’s first LAN in 2019 and competing for the Spring 2020 League of Legends Big East Championship. In light of COVID-19, only the esports teams maintained access to the facility, while following proper social distancing guidelines and maintaining the Seton Hall Pledge. The recent success of the Seton Hall University esports team seemed unstoppable, playing together in the state-of-the-art esports lab they, the Pirates, were off to a 3-0 season opener. The first wave of misfortune struck during Spring break when two starters, Ryan "IVERNEDTHISRANK" Kijevcanin and Jacob “NUMGUMS” Black, were away from campus and their gaming PCs for the week. During this week, four matches were scheduled, in which the Pirates lost all four and dropped from the first to the fifth seed.

The four losses could not come at a worse time. Just as students were returning from Spring break, the COVID-19 pandemic began to spread across the United States at an alarming rate. The University immediately suspended in-person classes through April and subsequently the entire semester. As part of the COVID-19 response, Riot Games, publisher of League of Legends, suspended all college competition. The news was devastating, especially for the three seniors that were a part of the League of Legends team. A 3-4 record was not the way they wished to end their collegiate esports career. Despite this news, the team continued to practice remotely on their Seton Hall issued laptops

Practice paid off on April 11th when Riot Games and esports organizer ESL resumed Big East Play. The Pirates, using a mix of VOIP tool Discord, school issued laptops, and personal desktops, joined virtually and finished the regular season 9-5 and placing in 4th place. The team was one step closer to earning the Big East Championship, a title that eluded them in the two prior seasons, finishing as semi-finalists and finalists in 2018 and 2019, respectively.

The 2020 ESL-Big East Conference League of Legends Tournament entered its last week with final round robin matches on Saturday, April 25, 2020 and playoff matches on Sunday, April 26, 2020. The tournament began with first seed St. John's University taking on Seton Hall on April 26th. Second seed and defending champions, DePaul University matched up against Villanova University. Semi-final games were in a best of three format.

After the win over St. John's, the Pirates faced Villanova in the finals. The Wildcats were able to win the first game of the series. The Pirates were able to use their advantage in objective control to take the championship after winning three straight games and sweeping Villanova in the best of five series. The Pirates dominated neutral objective control, gold leads, and kill lines in their three wins. Michael 'Windy Day' Kao, mid-laner, was nominated as Most Valuable Player in a series that had both cooperative gameplay, communication, and great attitude. 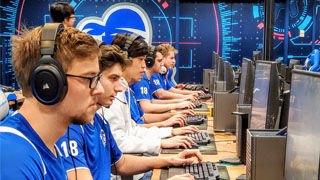 The future of esports at Seton Hall, both in and out of the classroom, is bright. Derek Larson, a professor in the College of Communication and the Arts, who is teaching a course in game design looks forward to students creating and displaying their own games at the on-campus esports lab, as well as hosting game developer conferences at the University.

The excitement of winning two Big East titles has spread to the program’s alumni who recently held a young alumni panel on esports. Collegiate Esports Blog, ACE, a blog founded by two Seton Hall alumni, Bryan Yeoh '19 and Nicholas Zeitlinger '18 are taking their firsthand experience with the collegiate gaming scene to esports news reporting. Their site will follow every minute of Big East Esports League of Legends and feature news, profiles and more on the matches, players and coaches who make it all come together.

The Seton Hall motto, Hazard Zet Forward, meaning at whatever risk, yet go forward, is prevalent as ever as the University and the esports team navigate the COVID-19 global pandemic uncharted waters. The Seton Hall esports program is pioneering the use of GGLeap-At-Home software, which began as a computer cafe tool and has been adapted for Universities to host tournaments and distribute prizes. Seton Hall is one of the first schools approved for the new software. Seton Hall Esports program advisor Victor Gomez said “With COVID-19 being a block to not only our competitive teams, but our gamers in general on campus, we hope to embrace this program and continue to forge community virtually.”

This year the University invited alumni, students, faculty, staff and the entire Seton Hall community to participate in Seton Hall Week from Oct. 23 to 30. Expanding to a full week from Seton Hall Weekend, the annual University tradition continued to reconnect, engage and celebrate Seton Hall. As health and safety are of paramount importance, Seton Hall Week was held online for the first time ever with more than 38 events, programs and presentations delivered remotely. The esports team hosted  League of Legends and Rocket League "Tips and Tricks", a highlight reel, and a meet and greet.

The university looks forward with great hope and determination to the successful conclusion of this semester.  As for the players, they are looking forward to getting back into the lab to practice and represent the school.