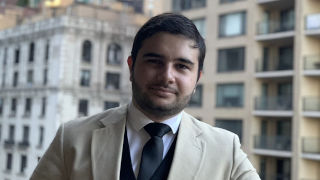 Santiago Cabrera, a junior majoring in Economics and Finance, attended virtual classes from his family’s home in Venezuela.

The COVID-19 outbreak in early 2020 shut down campuses around the world, forcing college students to adapt to the new normal of distance learning.

International students attending Seton Hall had to decide whether to stay in the U.S. or travel back to their home country to ride out the pandemic.

To gain a better sense of what the last year-and-a-half has been like for international students, we spoke to three undergraduates who remained actively engaged with Seton Hall from abroad during the 2020-2021 academic school year

Santiago Cabrera, a junior majoring in Economics and Finance, attended virtual classes from his family's home in Venezuela. The remote arrangement meant that he was able to spend time with his family, friends and dogs while taking classes. This, said Santiago, was the silver lining that he, like other students, experienced during lockdown.

Julia Clapis, a Diplomacy and International Relations and Economics double major from Brazil, and Julian Carbonell, a Design and Visual Communications major from the Philippines, also discovered the benefits of attending school remotely. 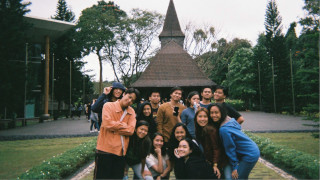 Julian Carbonell, a Design and Visual Communications major from the Philippines, was able to spend more time with friends and family while studying from home last year.

Julia and Julian, who are both seniors, said the semester was good overall all, and that being home was a positive experience that enabled them to focus on their studies and improve their GPA. Staying on track academically and remaining connected with a campus that was thousands of miles away meant putting in extra effort into reaching out to professors and classmates. The time zone in the Philippines is 12 hours ahead of the East Coast, which felt like an added challenge for Julian. He said it was crucial for him to communicate with his professors and classmates frequently. He was able to receive notes and special consideration when the time difference made it impossible for him to attend classes live. Fortunately, Santiago said that his professors were "easier to connect with more than ever before."

All three students said that their home environment was very conducive to getting schoolwork done, and not a distraction for them. Julian was grateful for the support he received from his family. While Santiago felt more direct pressure from his family at home to work harder and do better in school

Despite the lack of actual in-person interaction, Julia and Julian tried to participate in school clubs to stay connected with campus life. Julia is a part of the International Law Society, which held meetings throughout the year. She was also active in the Student Activities Board, helping with planning virtual events. Back in the Philippines, Julian stayed kept up with The Filipino League at Seton Hall, aka, FLASH.

When asked to compare in-class with remote learning, the students aid there were more pros than cons. According to Julia, attending class from the comfort of her bedroom was a great option. She was also able to save money on flights, food, and other expenses. Being at home gave Julia extra time to participate in one of her hobbies, horse racing.

Santiago was grateful for the extra time he had to spend with his family and his dog over the last year. Julian also enjoyed catching up with his siblings, and had more control over his school schedule. His professors, he said, were understanding and flexible.

Julia admitted she would have felt more connected if in-person learning was an option last year. Julian had a similar experience, adding that work and family obligations while studying at home made remote learning more of a challenge.

Santiago faced the added difficulty of poor internet connectivity at times and felt that his professors were not always understanding about his computer situation.

Given the choice of remote or on-campus learning, Julian and Julia agreed that in-person classes are preferable and allowed for better relationships and interactions with students and professors. Santiago said that he preferred remote learning that allowed him to reconnect with his family. He recommended that, "if a student is on the fence about staying home or studying in person, they should stay home if they have a good environment."

Ultimately each of the students experienced the education challenges created by the pandemic in their own way. And, whether they are at home or back on campus this year, they are ready to make the best of the semester ahead.