Dante and The Good Life Dinner and Discussion with Fr. Chase 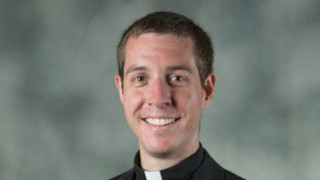 The Center for Catholic Studies is pleased to announce the first of a series of events commemorating Dante's 700th Anniversary at Seton Hall. Join us on Wednesday, October 6, 6-8:30 p.m. for Dante and the Good Life: a discussion with Fr. Chase Pepper, SHU '07 (HONS, POLS, CAST) and fellow Pirates about Dante, Happiness, and Our Lives Together. Fr. Pepper is a Gates Cambridge Scholar at Cambridge University, UK. The event will be available via Zoom.

Fr. Pepper graduated from Seton Hall University in 2007 with degrees in Political Science and Catholic Studies. He entered the Congregation of Holy Cross in 2009, earned a Master of Divinity from Notre Dame in 2014, and was ordained to the priesthood in 2015 as a member of the Congregation of Holy Cross. He spent three years in the departments of Campus Ministry, Residence Life, and Theology at King's College in Wilkes-Barre, Pennsylvania. In 2018 he was awarded the prestigious Gates Cambridge Scholarship to pursue a Ph.D. at Cambridge University in England.

At Cambridge, Father Pepper's research has focused on themes of exile and unity in Dante's Divine Comedy. He explains, "A question overtook me during a drive through the Pennsylvania Wilds in 2015. How might people in life situations of 'exile' have access to theology and literature itself conceived out of exile? Thus, a passion for Dante that had begun during my first year of seminary at the University of Notre Dame developed into a weekly Dante study group at my local prison in northeast PA, and through my exposure to the lives and hopes of these inmates over the course of two years, I began to see how Dante could be used to explore the fundamental structures of and possibilities for human unity, even in the midst of fragmentation and isolation."

The Dante 700th Anniversary series is co-sponsored by the Center for Catholic Studies, the Catholic Studies Program, the University CORE Curriculum, College of Communication and the Arts, the Immaculate Conception Seminary School of Theology, University Libraries, Special Collections and Walsh Library.

Our next event in the series will take place October 28: a guest scholar panel on Dante's Journey of Transformation. Other events will follow on November 9 and 11. For more information, please contact catholicstudies@shu.edu.