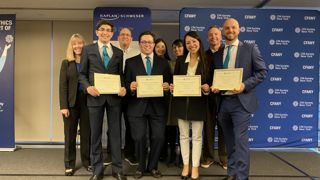 From the more than 1,150 universities around the world that participated in the 2020 CFA Institute Research Challenge, the Stillman School of Business team was crowned the Americas Regional Champions and was one of only five universities worldwide to advance to the Global Finals. This is the second time in three years that a Stillman team has earned a spot in the global competition.

The team of MBA students Timothy Kolesaire, Claudia Ko, Steven Pomponio and undergraduate student Anders Opitz have been competing in the Research Challenge since February, presenting their research and financial analysis on Merck & Co., Inc., a leading biopharmaceutical company. The Challenge began like any tournament with competitions at several levels. The Stillman School team won the NY Regional Competition, which advanced them to the Americas Challenge, which then led to the team competing in the Global Finals.

For the Americas Challenge, which took place April 21 virtually on Zoom, the team competed against the University of Delaware, the Illinois Institute of Technology, the Instituto Tecnológico Autónomo de México (CFA Society Mexico) and the Insper Instituto de Ensino e Pesquisa (CFA Society Brazil). This win qualified the team for the Global Finals, taking place the very next day, on April 22. 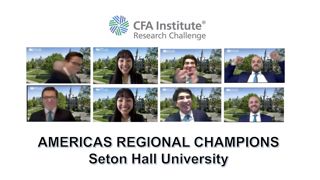 "We were able to prevail against some of the top universities in North and South America," said team captain Timothy Kolesaire. "Winning the Americas Region, and being the only team from the United States to compete on the global stage, demonstrates how unique and talented this team of students is."

"This competition is a real proving ground. This year's students faced the added challenge of analyzing companies in an environment where even seasoned professionals are unsure of what lies ahead – and they had to compete in a virtual environment," CFA Institute chief executive and president Margaret Franklin said.

"Our education experience at Seton Hall has been enhanced by this Research Challenge," said team member Claudia Ko. "It was a blessing to be part of."

"As a marvelous blend of talent, drive, energy, dedication, and cohesion, this CFA Research Challenge team was not only the best that Seton Hall has ever fielded, but it was an unparalleled, six-month educational journey for all of us, including me," said Anthony Loviscek, team advisor, chair of the Department of Finance and a recipient of the 2020 Bishop Bernard J. McQuaid Medal. "It is what makes Seton Hall so special."

Ko shared, "To future Pirates who compete in the next challenge, believe in yourself and believe in each other. Take one day at a time and trust in your Stillman legacy! Go Pirates!"