These were the findings of a Seton Hall Sports Poll conducted November 13-16 among 1,506 American adults, geographically spread across the country. The Poll has a margin of error of +/- 3.2 percent.

A Seton Hall Sports Poll in April of this year, which received widespread international attention, and combined indoor and outdoor events, found that 72 percent would not attend these events without access to a vaccine. The poll in April also found that 61 percent of those who described themselves as sports fans said they would not attend. 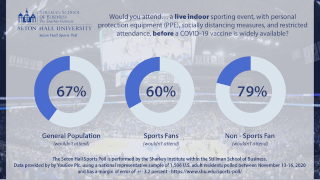 "The recent news of vaccine breakthroughs has got to be enormously uplifting to those in the business of selling tickets, be it sports or entertainment," said Professor Charles Grantham, Director of the Center for Sport Management within the Stillman School of Business, which oversees the Seton Hall Sports Poll. "Even though the percentages who would not attend have improved since the spring and the onset of the pandemic, these are just awful numbers to ponder."

Stillman Professor of Marketing and Poll Methodologist Daniel Ladik agreed, "The Pfizer announcement of an imminent and efficacious vaccine was widely published prior to our polling and is presumably reflected in these numbers. An eager nation of sports fans awaits."

People with Children More Likely to Attend Events
Interestingly, and perhaps related to school and youth athletic events, the number of those who would attend sporting events with PPE and social distancing was greater for those with children under the age of 18. Only 49 percent of these parents said they would not attend outdoor events (compared to 58 percent of the overall population); and 60 percent said they would not attend indoor events (compared to 67 percent overall).

Do Fans in the Stands (Virtual or Otherwise) Make a Difference?
Noting that some professional and college sporting events have allowed fans with limited capacity, the poll also asked whether or not fans in the stands under these circumstances provide an advantage for the home team. Whereas 43 percent of the overall population said they believed the presence of fans provided a "home team advantage," 53 percent of those who described themselves as sports fans said it did. 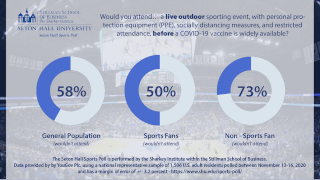 "Although many of the leagues tried admirably to salvage their seasons when most thought they would be lost, it's obvious from these findings that the public has some doubts and concerns," said Grantham, former executive director of the National Basketball Players Association. "It will be interesting to see how the leagues— and fans – adjust moving forward."

About the Poll:
The Seton Hall Sports Poll, conducted regularly since 2006, is performed by the Sharkey Institute within the Stillman School of Business. This poll was conducted online by YouGov Plc. using a national representative sample weighted according to gender, age, ethnicity, education, income and geography, based on U.S. Census Bureau figures. Respondents were selected from YouGov's opt-in panel to be representative of all U.S residents. This poll release conforms to the Standards of Disclosure of the National Council on Public Polls. The Seton Hall Sports Poll has been chosen for inclusion in iPoll by Cornell's Roper Center for Public Opinion Research and its findings have been published everywhere from USA Today, ESPN, The New York Times, Washington Post, AP, and Reuters to CNBC, NPR, Yahoo Finance, Fox News and many points in between.

Q1.Would you attend… A live outdoor sporting, with personal protection equipment (PPE), socially distancing measures, and restricted attendance, before a Coronavirus (COVID-19) vaccine is widely available?
a) Yes, I would attend (28%)
b) No, I would not attend (58)
c) Don't know/no opinion (14)

Q2.Would you attend… A live indoor sporting, with personal protection equipment (PPE), socially distancing measures, and restricted attendance, before a Coronavirus (COVID-19) vaccine is widely available?
a) Yes, I would attend (21%)
b) No, I would not attend (67)
c) Don't know/no opinion (12)

Q3.Thinking about the impact of the Coronavirus (COVID-19) on the current sports season (e.g., shortened sports seasons, changes in game formats, etc.)... To what extent do you agree or disagree with each of the following statements? Please select one option on each row.

Q7.In stadiums where fans were not allowed to attend, many teams featured "virtual fans" on screens in the arena or as part of the TV broadcast. Which, if any, of the following statements best describes your thoughts about this practice? Please select the option that best applies.
a) Virtual fans were a good replacement for actual fans (27%)
b) Neutral - virtual fans weren't even noticeable (26)
c) Virtual fans were a distraction to my overall enjoyment of the game (11)
d) Don't know/no opinion (36)

To see clearer versions of these tables, click here.

About Seton Hall University:
One of the country's leading Catholic universities, Seton Hall has been showing the world what great minds can do since 1856. Home to nearly 10,000 undergraduate and graduate students and offering more than 90 rigorous academic programs, Seton Hall's academic excellence has been singled out for distinction by The Princeton Review, U.S. News & World Report and Bloomberg Businessweek.

Seton Hall embraces students of all religions and prepares them to be exemplary servant leaders and global citizens. In recent years, the University has achieved extraordinary success. Since 2009, it has seen record-breaking undergraduate enrollment growth and an impressive 110-point increase in the average SAT scores of incoming freshmen. In the past decade, Seton Hall students and alumni have received more than 30 Fulbright Scholarships as well as other prestigious academic honors, including Boren Awards, Pickering Fellowships, Udall Scholarships and a Rhodes Scholarship. The University is also proud to be among the most diverse national Catholic universities in the country.

During the past five years, the University has invested more than $165 million in new campus buildings and renovations. And in 2015, Seton Hall launched a School of Medicine as well as a College of Communication and the Arts. The University's beautiful main campus in suburban South Orange, N.J. is only 14 miles from New York City — offering students a wealth of employment, internship, cultural and entertainment opportunities. Seton Hall's nationally recognized School of Law is located prominently in downtown Newark. The University's Interprofessional Health Sciences (IHS) campus in Clifton and Nutley, N.J. opened in the summer of 2018. The IHS campus houses the University's College of Nursing, School of Health and Medical Sciences and the Hackensack Meridian School of Medicine at Seton Hall University.