What Great Minds Can Do: Alonso Alfredo Arbulu Arenas 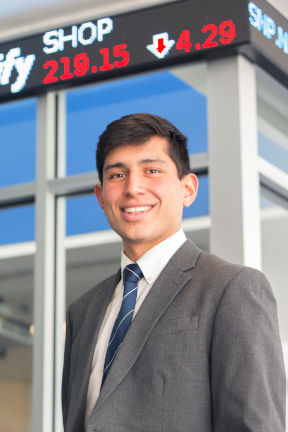 Alonso Alfredo Arbulu Arenas worked hard at Seton Hall, and after three and a half years, his effort paid off. Months before graduation, he had a dream job waiting for him at Deloitte Consulting.

After arriving from Peru, eager to dive into the wealth of opportunities Seton Hall offers, Alonso enjoyed great success while exploring his full range of interests. By fully utilizing his faculty and career counselor relationships, he obtained four competitive internships: at National Defense University in Washington, D.C.; the Central Reserve Bank of Peru; the global accounting firm Ernst and Young, and a hedge fund in New York City. One internship came as the result of a connection his professor made for him — "he saw my interest in credit research and was able to put me in front of this company."

During his sophomore year, Alonso made his first trip to New York City for a global case study competition alongside students from Ivy League universities. "While presenting, I took a moment to look out the window, and I saw the Statue of Liberty. That's when it hit. … I realized that as a sophomore I was able to accomplish my dreams!"

Fascinated by finance, Alonso participated in a student-led investment club, where he managed a financial portfolio of more than $150,000. He was elected captain of the intramural soccer team and president of the Association of Latino Professionals for America, and he worked as a student-athlete tutor. He was also heavily involved with community service initiatives such as food pantries and toy drives.

Alonso leaves Seton Hall with an impressive resume and broad experiences, ready to take on new adventures. "Every single opportunity I have been given at the University, from the core classes to the networking opportunities to internship opportunities to career fairs and the Career Center, each one of those pieces individually has helped me become who I am today. I believe that without the help of the people that I've encountered at the University, none of these things would have been possible."