Intersection Between Theology and Science Explored at Upcoming Book Lecture 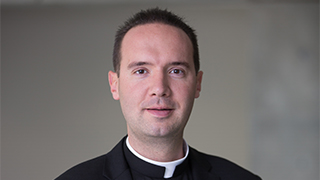 Father Joseph R. Laracy, S.T.D., assistant professor of systematic theology at Immaculate Conception Seminary School of Theology (ICSST) and affiliated faculty member in the Department of Mathematics and Computer Science as well as the Catholic Studies Program, examines the relationship between theology and science through the lens of prominent American theologian and physicist, Ian Graeme Barbour, in his newly published book, Theology and Science in the Thought of Ian Barbour: A Thomistic Evaluation for the Catholic Doctrine of Creation.

To commemorate the book's release, all are invited for a lecture presented by Father Laracy at 3 p.m. on Wednesday, December 1 in the Chapel of Christ the Good Shepherd in Lewis Hall. A reception and book signing will follow, where copies will be available for purchase.

Building on his doctoral research, Father Laracy's book analyzes how Ian Barbour's principles could enrich the dialogue and integration of the Catholic doctrine of creation with the natural sciences utilizing the perennial wisdom of Saint Thomas Aquinas.

Studying the intersection of theology and science is rooted in Father Laracy's background in the sciences and engineering—including work on the NASA Deep Impact Mission—and in his service for the Archdiocese of Newark and at Seton Hall University.

"In this research, I analyze Barbour's distinctive approach to the relationship of theology and science, largely unexplored in the Catholic tradition, according to fundamental theological criteria," said Father Laracy. "Barbour's epistemic, metaphysical, and ultimately theological foundations present a challenge and an opportunity to Catholic fundamental theology. I take up this challenge by drawing out how his thought might enrich Catholic theological reflection on creation in particular."

Father Laracy holds a master's degree in engineering systems from the Massachusetts Institute of Technology and a doctorate in sacred theology from the Pontifical Gregorian University in Rome.

Registration for the lecture is encouraged by emailing Elizabeth Vacchiano at elizabeth.vacchiano@shu.edu or visiting the calendar listing here for more information.

About ICSST
Immaculate Conception Seminary is a House of Formation for the Roman Catholic priesthood and the School of Theology of Seton Hall University. Forming priests for God's people has remained the Seminary's constant focus, and the Seminary faculty—well-educated authors and scholars in their own fields—devote their time and energy to preparing these men for priesthood amidst the challenges of the 21st century. The School also focuses on the education of lay men and women in theology, permanent deacons, religious who are not studying for ordination, and already-ordained priests—not only providing for them academically, but also for their personal, pastoral, and spiritual formation.