Last month, Immaculate Conception Seminary School of Theology and the Archdiocese of Newark made their powerful presence known in New Orleans, Louisiana. There, more than 2,800 deacons, wives and families attended the 2018 National Diaconate Congress celebrating the 50th Anniversary of the restoration of the Permanent Diaconate in the United States.

On Sunday, July 22, opening Mass was celebrated by Archbishop Christophe Pierre, Papal Nuncio to the United States, and homilist Archbishop Gregory Aymond of New Orleans. Participants gathered to begin a four-day celebration that explored the theme "Christ the Servant: Yesterday, Today, Forever." With diverse backgrounds from more than 15 countries and various personal stories of their journey to the diaconate, deacons, wives and families came together for one common goal: to celebrate the call to the diaconate, a call to service for the Church. 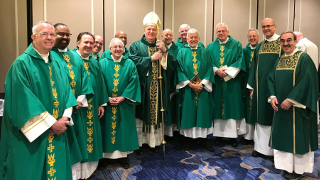 Cardinal Tobin poses with deacons from the Archdiocese of Newark.

The School of Theology and the Archdiocese of Newark were well represented with a total of 32 participants in attendance. Cardinal Joseph Tobin C.Ss.R., Archbishop of Newark, concelebrated the opening Mass and was later the principal celebrant for the first full day of the Congress. Joining him on the Altar were Rev. Msgr. Joseph Reilly, Rector/Dean of Immaculate Conception Seminary School of Theology; Rev. Msgr. Timothy Shugrue; Deacon John McKenna; Deacon Asterio Velasco; and Deacon Andrew Saunders, Director of the Center for Diaconal Formation at Immaculate Conception Seminary. Assisting in distribution of the Most Precious Body were 10 deacons from the Archdiocese including Deacons Lawrence Bonnemere, George Carbone, Jim Detura, John (Jack) Gray, Paul Kazanecki, Stephen Lipski, Joe Mantineo, Joseph Persinger, Kevin Reina, and Walter Wiggins. Marcia Reina, wife of Deacon Kevin, served as lector, and gift bearers were Virginia Gray, Yraida Lipski, and Patricia Wiggins, all wives of deacons, and Kimberly Mailley, assistant director of the Center for Diaconal Formation.

Reina recalls: "The energy, excitement and joy were palpable! People smiled, laughed, hugged and posed for pictures. Collectively, all 2,800 of us shared a common passion: our deep love for God and our commitment to serve, and strangers though we may be, we were all part of one big beautiful Catholic deacon family."

Attendees gathered for daily prayerful mornings of Lauds and Mass. General sessions by key leaders from dioceses around the country shared their own reflections on the diaconate, its history, the current state and its direction for the future. Each afternoon, attendees had a plethora of workshops from which to choose that piqued their own interests on the diaconate.

Participants enjoyed a keynote address by Cardinal Tobin, who noted the deacon's service to the Church is modeled after the life of Jesus Christ, quoting Mark 10:45, "For the son of man did not come to be served but to serve, and to give his life as ransom for many." He spoke of the three-fold ministry of the deacon, Word, Liturgy, Charity, and stressed the importance of outward service by deacons to the people of God. Deacon Walter Wiggins shared: "I am glad that Cardinal Tobin used the term 'Christ the Deacon' (in contrast with Christ the Servant) and stated that deacons 'are a necessity' during his talk. Frequently, when one hears about the beginnings of the diaconate the point of origin is the 6th chapter of Acts, and the diaconate can be seen as a theological afterthought of the Apostles. In reality, we ought to begin with Christ always. It was Christ who handed onto his apostles 'All authority in heaven and earth' (Mt. 28:18), including the authority to serve, as dramatically demonstrated in his washing of the feet of the apostles. It is this authority that has been handed down from the apostles, to their successors the bishops, and to us the deacons of the Church."

A special presentation by Dianne Traflet, Associate Dean and Assistant Professor of Pastoral Theology, was delivered at the historical World War II Museum to a sold-out crowd of 600. "My heart pounded when I read the title of Dianne's presentation on the registration page of the Diaconal Congress website," says Reina. "'Called Out of Darkness: Building the Body of Christ from the Barracks of Dachau.' How was it possible to build the Body of Christ from a concentration camp -- especially Dachau? The atrocities during the Holocaust were unspeakable." Traflet's inspirational talk offered a look at how, out of the darkness of the Dachau concentration camp, imprisoned priests had the vision to lay the seeds for the restoration of the permanent diaconate as a way of restoring the Church after WWII. In her closing remarks, Traflet called deacons to action, challenging them to be deacons of courage, truth, joy, life, love and to be Marian.

Traflet also delivered an inspirational workshop for the wives of deacons reflecting on the life of Saint Edith Stein and the call of Catholic women to spiritual accompaniment. Nearly 500 were in attendance. Connecting Saint Edith Stein's life-altering events to that of the wife of a deacon, Traflet spoke of the wife's gift of adapting herself for the sake of others. She spoke of Edith Stein's accompaniment, entering into the pain of others to just "be" with empathy and compassion.

Cardinal Daniel DiNardo, Archbishop of Galveston-Houston, celebrated the closing Mass of the Congress. He stressed the importance of the role of diaconal service to the Church, noting that the deacon is part of the clergy as an ordained minister, not for the priesthood, but for service. Cardinal DiNardo expressed his gratitude to all deacons and their wives for their commitment to educating and forming the people of God.