St. Catherine of Siena: A Life of Contemplation and Action Nearly 100 people spent a summer Saturday attending a retreat focused on the life and work of St. Catherine of Siena. Hosted by the School of Theology, the program was led by Donna Orsuto, S.T.D., of the Institute of Spirituality of the Pontifical Gregorian University in Rome.

As it turned out the 14th century lay woman has a very modern appeal. Unlike many of her contemporaries, Caterina, as she was known, was outspoken and independent.

She lived a pious life of cloistered prayer for three years before emerging from her family's home to devote herself to active life, centered around rebuilding the Church. Her cause became addressing, with love, the brokenness she saw in society and the Church. While still her in her 20s, she had the ear of popes and princes alike during an age when violence and death were rampant, and the Church was rattled by scandal and division at the highest levels.

In no way limited by her lack of formal education, Catherine is known to have written at least 380 letters, many calling out Europe's corrupt powerbrokers. 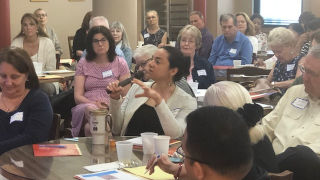 "Some people thought she was a selfish busybody," Orsuto told her audience. She was, in fact, "A remarkable woman of the 14th century, she was a woman of God, a woman of the Church and a woman of her times. She functioned as a de facto diplomatic envoy to two popes, negotiated peace, lobbied both Church and secular powers on behalf of one of those popes in the time of the Great Schism, and authored a mystical dialogue that greatly influenced both Church doctrine and Italian literature for centuries to come."

Orsuto shared examples of some of Catherine's most influential works,
including an excerpt from The Dialogue of Divine Providence, considered the theological compendium of St. Catherine's writings which offers a spiritual roadmap for those who desire to grow into a deeper experience of union with God.

Retreat participants were invited to read a letter to Pope Gregory XI, written in August 1376, in which Catherine forcefully calls on the pope to leave Avignon, where a competing papacy had been established, and return to Rome to work toward the Church's reunification and peace. "I long to see you free of all slavish fear," she writes. "May a blazing flame of charity so burn in you that you will not listen to the voice of incarnate devils."

As Orsuto explained, the age in which Catherine lived provides "a distant mirror of our current times." Studying Catherine's life and her writing allows us to see the principles that guided her ideas and actions. 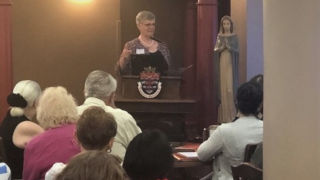 Catherine is a model for those who are seeking a life of contemplation and action. She loved the Church, Orsuto shared, "but it was not a blind love, but a love clothed in the truth." She was brokenhearted over the divisions within the Church and used her influence to help the Church heal and rebuild.

The retreat on Catherine of Siena concluded a summer graduate course focused on Women Mystics of the Church. The course examined the lives, times and spirituality of such women mystics as Teresa of Avila, Thérèse of Lisieux, Hildegard of Bingen, Julian of Norwich, Teresa of Calcutta and Dorothy Day.

"We were delighted to bring Dr. Orsuto to the School of Theology for this inspiring summer course and the St. Catherine of Siena retreat," said Dianne M. Traflet, J.D., S.T.D., Associate Dean for the Immaculate Conception Seminary and director for the Institute of Christian Spirituality. "Immaculate Conception Seminary and the Lay Center at Foyer Unitas, based in Rome, have partnered together to develop a number of programs like this one—programs that show how the rich history of the Church and God's people can inspire and direct us moving forward. We are looking forward to bringing people together in the coming year."