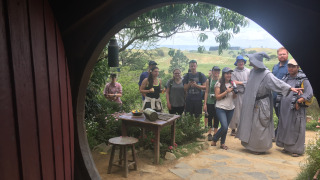 This summer, Newman House Press published a new book by Fr. Francis of the Child Jesus Nekrosius, C.S.J., who served as a Campus Minister at Seton Hall from 2014-2017 and earned his M.A.T. from the School of Theology in 2018. The title is The Theological Landscape of Middle Earth: On Theology in J.R.R. Tolkien's Fantasy.

The idea for this book grew out of a Campus Ministry program led by Fr. Francis in which he led students in a detailed study on the connections between The Lord of the Rings and the Book of Revelation. The study culminated in a trip to New Zealand in the footsteps of Peter Jackson's recreation of Tolkien's masterpiece.

Why did a priest and religious put such significant time and effort into this endeavor? Fr. Francis explains: "Fantasy may be a nice entertainment. But not only: fantasy can convey the deepest questions of human heart, including religious and theological ones, and responses expressed in the way which would not be possible in any other way, namely, through mythological archetypes and symbols. This book explores those contained in J.R.R. Tolkien's fantasy, especially in The Lord of the Rings." 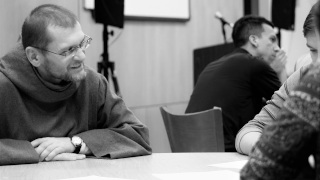 Taking themes extremely relevant and attractive for today's youth, Fr. Francis's research includes reflection on Beauty as a privileged path to Transcendence, and then the consideration of Myth Making and Fantasy, which may end with a "Baptism of Imagination," following C.S. Lewis's wording. Fr. Francis offers the keys to theological interpretation in The Lord of the Rings, and concludes with J.R.R. Tolkien's own reflection on fantasy's effects: for Tolkien, fantasy was a remedy for the aging and despairing world. Fr. Francis writes: "The conclusion contemplates holiness as the ultimate escape from the ugliness of sin into the beauty of God's grace. It is empowered by hope, which is inspired by beauty perceived as the radiance of the eucatastrophic eschatology. It enables Christian heroism to take up its daily challenge."