Shepherds of the Seminary James Roosevelt Bayley was a member of a prominent New York family. St. Elizabeth Ann Bayley Seton was his father's half-sister, and Uncle Isaac Roosevelt, his mother's brother, was the great-grandfather of President Franklin D. Roosevelt. Bayley was ordained to the Episcopal priesthood on February 14, 1840. Little more than a year later, he resigned his rectorship and, on April 28, 1842, was received into the Catholic Church at the Church of the Gesú in Rome.

He served as vice president of St. John's College (later Fordham University), as pastor on Staten Island, and as secretary to Archbishop Hughes. On July 23, 1853, Bayley was named first Bishop of Newark. The new diocese comprised the entire state of New Jersey, which previously had been divided between the Archdiocese of New York and the Diocese of Philadelphia.

During Bayley's episcopate, the Catholic population of the diocese doubled to 80,000, 80 new churches were built, and the Catholic school population grew from 1,500 to 20,000.

Bayley put the new diocese on a firm footing. In 1856 he founded a men's college at Madison and named it after his aunt. Two years later, he prevailed upon the New York and Cincinnati Sisters of Charity to assist him in founding a New Jersey branch of his aunt's congregation. In 1860, he oversaw the move of Seton Hall College to South Orange, while the Sisters of Charity moved their motherhouse to Madison. In the same year, Immaculate Conception Seminary at Seton Hall commenced instruction in theology. Bishop Bayley conducted diocesan synods in 1856 and 1868 and pressed the state legislature into passing legislation providing for the incorporation of Catholic parishes. One of his last acts as bishop was to secure the site of Newark's present cathedral.

- From: Raymond Kupke, "James Roosevelt Bayley" in The Encyclopedia of American Catholic History.

The Archbishop of Baltimore also offered the new Bishop of Newark some rather genteel advice: "Never do anything today that can be as well done tomorrow --drink a little claret with your dinner. Study to be quiet and you will grow fat and do much good in your generation." 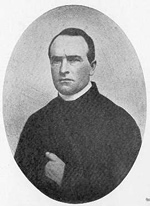 Father McQuaid wore a high hat, rather the worse for wear, and clothes that were dusty, for he had been rambling over the college farm. . . . "Good morning, father," said I. He paused a little before returning my greeting and then said: "Oh, I suppose you are Doctor Brann?" I told him I was. He then gave me a sharp patronizing look that took me in from head to foot. . . . "Well," said he, more civilly, "Come in. You will not find here the luxuries you have been accustomed to in St. Sulpice at Paris or in the American College at Rome. And I hope you will be happy in your new home." "Oh, I am sure of that," I replied, "for I love theology and study, and this is a beautiful place." "Well," said he, "come out and I'll show you my farm." Out we walked together. Pointing to a couple of gentlemen: "There," said he, "are some of my seminarians." A few paces further on, "There are some of my college boys," and he continued, "that's my man Simon you see yonder; here are some of my potatoes, there are my horses, over there my barn," and pointing at it, "there is my manure heap" . . . We entered the college. He showed me my room and then gave me a little lecture about Roman doctors and the Jesuits. He thought that the Roman doctors were too conceited and that the Jesuits could not teach as well as he could. "Seton Hall under my care," said he, "must above all things turn out young gentlemen." I agreed with him that it ought to do so, but felt that he was hitting me hard on the Roman doctor question and, as I was a pupil of the Jesuits, I did not like to hear them disparaged."

McQuaid was not one to be trifled with, even by his bishop. During Lent of 1863 a bizarre sequence of events unrolled. It was the equivalent of an ecclesiastical comic opera. Bishop Bayley wanted the seminarians at the cathedral for Holy Week services; Father McQuaid and the faculty wanted them at the seminary. Bayley ordered McQuaid to send them to the cathedral. McQuaid, in a fit of pique, handed the account books to Doctor Brann, the vice president, and stormed out of Seton Hall. He went to New York City where he arranged to become the assistant to his friend, Father Donnelly, the pastor of St. Michael's. The wise old vicar general, Father Patrick Moran, intervened and convinced McQuaid to submit to the bishop, return to Seton Hall, and allow the seminarians to go to the cathedral. Bayley's only recorded comment about the incident is that the seminarians sang "the best tenebrae we ever had."

For seminarians, Solemn Pontifical Masses, other episcopal events, and High Masses at Seton Hall were occasions of prayer and solemnity, and opportunities to perfect the details of ecclesiastical ceremonial. They also were a source of amusement; an amusement that they, of course, had to be discreet in expressing. McQuaid, Bayley, and Corrigan were very poor singers: "Bishop Bayley when he came to a high note rose on his toes, and when the note was a low one he leaned back on his heels."

In his ministry to the soldiers during the Civil War, he utilized unusual but effective methods of evangelization.

Late in life Bishop McQuaid loved to tell his ecclesiastical students of his short trip to the relief of dying Catholic soldiers, and his eyes twinkled merrily whenever he related how he made a convert through whiskey. A wounded Protestant soldier, through a long, weary, sleepless night, watched intently how the Catholic priest ministered small doses of the liquor to a fellow-soldier in a critical condition from his wounds. Later he told Father McQuaid if it was his faith that taught him thus to care for his neighbor, he also wished to be a Catholic.

The first professor of theology was Naples-born Reverend Januarius de Concilio who taught at Seton Hall from 1861 -62, apparently using Perrone as his text. Father de Concilio did not remain long at Seton Hall. He was unhappy. In June 1862, the always-blunt McQuaid informed Bayley that "I do not expect that Father de Concilio will remain here another year. . . . Father De C. has got the kink in his head that his health is suffering, and it will not be possible to retain him; nor is it advisable to do so against his will."

De Concilio left Seton Hall that year, or early in the next. He had a long career as a pastor, chiefly at St. Michael's in Jersey City, and continued his intellectual pursuits, authoring numerous books and articles. He was the primary author of the famous Baltimore Catechism. His later writings drew a good deal of attention when he speculated that the Redemption of Christ also redeemed extraterrestrial beings elsewhere in the universe.

De Concilio was the only professor of theology for the eight to 10 (we do not know the exact number) seminarians enrolled in fall 1861.