The Sister Rose Thering Fund for Education in Jewish-Christian Studies (SRTF) is commemorating the hundredth birthday of the late Sister Rose Thering, O.P., Ph.D, a woman of valor, with a virtual centennial celebration. The event will be held on Wednesday, October 14 at 7 p.m.

As an activist, scholar and professor, Sister Rose Thering (1920-2006) dedicated her life to battling prejudice towards the Jewish people and promoting inter-religious cooperation.

At the age of 16, Sister Rose joined the religious community of the Sisters of St. Dominic and following her profession as a sister, she began to teach. "There were no Jews where I grew up," Sister Rose once said. "I only knew them from what we read in our religious textbooks." 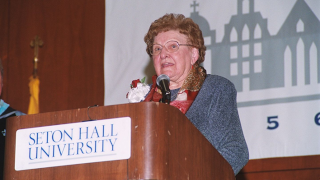 In 1961, she devoted her doctoral dissertation to exposing extensive indictments against Judaism and Jews in religious texts. Her work informed Nostra Aetate, the Vatican document that reversed hundreds of years of Church policy and set it in the path of inter-religious dialogue and appreciation of other religions. Her contributions became an essential part of the reconciliation between Catholics and Jews.

To further her vision of a world free of prejudice, Sister Rose came to Seton Hall University where she established an educational outreach initiative known as the Menorah Studies program. Her work with the program emphasized teacher education and inspired the creation of the Sister Rose Thering Fund for Education in Jewish-Christian Studies.

The October 14 virtual event, which honors her legacy of lifelong service and scholarly research, will be hosted by Monsignor C. Anthony Ziccardi, interim executive director of the Sister Rose Thering Fund.

"It is important that we celebrate Sister Rose's service and the greater understanding she forged among people of Catholic, Jewish and other religious traditions," said Monsignor Ziccardi. "Her exemplary commitment to advocacy and interfaith education models the servant leader spirit that we wish to cultivate in our students today."

Other notable speakers at the event include:

Sister Rose's life and work are the subject of the documentary film Sister Rose's Passion. The film won a major award at the Tribeca Film Festival in 2004 and was nominated for an Academy Award in 2005.

Up until her retirement in 2005, Sister Rose worked tirelessly as administrator for the Sister Rose Thering Fund, recruiting educators and raising money to provide them with full tuition scholarships to cover their graduate classes in Seton Hall's graduate program in Jewish-Christian Studies.

"Now, as we observe Sister Rose's 100th birthday, we can take pride in knowing that the Sister Rose Thering Fund carries on her mission and her name," said David Bossman, founding executive director of the Fund. "Her early hesitance in accepting the name of the Fund–she suggested the Pope John XXIII or the Cardinal Bea Fund–eased away with our insistence that it was her dynamism and commitment to education that we were intending to continue and develop."

The Sister Rose Thering Fund continues to welcome and underwrite the tuition for socially conscious educators who instruct school children in the values of diversity and cooperation and promote interfaith dialogue. Since 1993, more than 400 teachers throughout New Jersey have benefited from full tuition scholarships for their courses in Jewish-Christian Studies and have gone on to impact more than 160,000 students in the classroom.

"Looking forward now to the next 100 years, we have confidence that Sister Rose's work will continue to live on in our teacher-scholars, their students, and the students of their students," said Bossman. "May her name be a blessing, and may her blessing carry forward the work of the Sister Rose Thering Fund for Education in Jewish-Christian Studies, displacing ignorance and prejudice with understanding and appreciation, building a more harmonious society in which we are honored by living lives of justice and peace."

Registration is required for the virtual event, which is free and open to the public.

For information about the registration link or to make a contribution, please visit the Sister Rose page.