At the 26th annual Evening of Roses on Tuesday, June 4, the theme of "keeping the story alive for generations" was reflected in speeches, song and video reflections. Honoree David M. Bossman, Ph.D., professor of Jewish-Christian Studies at Seton Hall and founding executive director of the Sister Rose Thering Fund, is retiring after 34 years of service to the University. Sister Rose Thering Fund Chair Emerita Deborah Lerner Duane was also honored during the event.

Greeting the crowd of more than 160 guests, Seton Hall's Interim President Mary J. Meehan, Ph.D., noted that the Sister Rose Thering Fund is "vitally important to the University. It is an example to our students that God wants us to live in peace, especially during these difficult times." She added, "We couldn't have asked for better leaders than David Bossman and Deborah Lerner Duane. [Their] dedication has brought the Sister Rose Fund to a high point." Honorees David Bossman and Deborah Lerner Duane at the 2019 Evening of Roses.

The invocation was delivered by Monsignor C. Anthony Ziccardi, S.T.D., S.S.L., vice president for Mission and Ministry, and secretary designee to the Board of Regents. Before introducing featured speaker Elisha Wiesel, co-chief information officer at Goldman Sachs and son of Marion and Elie Wiesel, a video from the 1998 Evening of Roses event was shown at which Elie Wiesel was presented an honorary doctorate degree from Seton Hall University. It featured his father Elie chanting in Hebrew "Ani Ma'amin," which was often sung by Jews as they were marched to the gas chambers in the Nazi death camps. The lyrics translate as "I believe in perfect faith of the coming of the Messiah."

Elisha Wiesel, after seeing the video, said, "What an amazing moment to see my father, singing about the return of the Messiah." He then spoke about his own return to Auschwitz, the site where his father's family was deported 75 years ago. While there with his son, Elisha re-read Night, the auto biographical account of Elie Wiesel and his experiences in the concentration camps of Nazi Germany, to guide his journey and help visualize and retrace his family’s steps.

"The lessons we leave for our children remain in question … but when we act with courage, Jews and Christians [in fact] believe in the same God," Wiesel remarked. 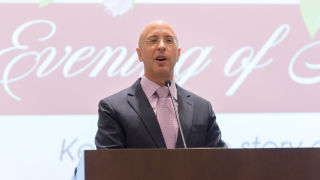 Following dinner, a musical program was performed by baritone Jason Detwiler and directed by Jason Tramm, D.M.A., assistant professor and director of choral activities at Seton Hall, and a trustee of the Sister Rose Thering Fund. "This is always an exciting group to be a part of," said Tramm. "It's a group that affects social change with so many people coming together to make an impact. There is a long history of music and art in this program, and I am proud to be a part of it."

The next featured speaker was The Most Reverend Roberto Octavio González Nieves, O.F.M., Archbishop of San Juan, Puerto Rico. Born in Elizabeth, N.J., his father, Jesús Hiram González-Orta, was a Seton Hall alumnus and reportedly the first Puerto Rican to graduate from the University. Archbishop González remarked that he was the beneficiary of Sister Rose's efforts, having been ordained as a bishop two decades after Vatican II. "I had hoped that the worst forms of bigotry had been resigned to history," noted Archbishop González Nieves. "Sadly, I have realized the need to modify my hopes. Hate crimes and anti-Semitism continue to be on the rise. The works of Sister Rose continue to encourage dialogue."

Lerner Duane remarked that the "the M.A. in Jewish-Christian studies program shows the human need for hope and new ideas; that the next generation will not repeat, but rather undo, the mistakes we have made. That in one's life, you can make a difference." 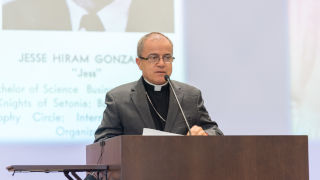 She reflected on how different next year would be without her co-honoree — and friend — David Bossman. "Thank you for all you have given to the Fund, to Seton Hall and to me," she said.

"After we lost Sister Rose, David was the guiding light of this enterprise and led us through a difficult time," said Kaufman, who is herself a Holocaust survivor. She announced that a sponsored scholarship honoring David Bossman would be established for the upcoming academic year.

During a tribute video (shown above), Bossman's friends and fellow founding trustees, many of whom have worked with him since the Fund was established in 1993, offered words of praise and well wishes.

In his own remarks, Bossman thanked Lerner Duane, Kaufman and "all the teachers who carry the message with a free heart and a full commitment. Sister Rose had a commitment to family, career and religious community," he said. "Tonight, we have a strong presence in the same light." His words were met with a standing ovation from the crowd.

Melinda Hanlon, chair of the Board of Trustees, Sister Rose Thering Fund, echoed the crowd's sentiment in her remarks: "David, you are the keeper of the faith and the compass we need."

Earlier in the evening, Heather Mecka, one of the Sister Rose Thering Fund teacher-scholars, read quotes from fellow classmates honoring Bossman. She added her own thoughts: "David, the impact you had on others is a ripple effect. We have shared what we learned with our students and colleagues, who then took very seriously the responsibility to carry this knowledge."

To close the evening, Cantor Perry Fine of Temple Beth Shalom, Livingston, N.J., chanted a Jewish blessing and commented, "David and Deborah, your lives are filled with mitzvahs, good deeds. I hope you feel the love that we feel here for you."

"Let There Be Peace on Earth" was then sung by Kaufman's granddaughter Manya Gaver, with the entire audience joining in.

Peter Shoemaker, Ph.D., dean of the College of Arts and Sciences, offered his congratulations to Dr. Bossman on his retirement. "I know that he will be sorely missed as a gifted teacher, distinguished scholar and valued colleague, who graced the College with his warmth of spirit and humanity," said Dr. Shoemaker. "Thanks to the work of David Bossman and Deborah Lerner Duane, Sister Rose Thering and her message of interfaith understanding continue to inspire the Seton Hall community — and the world." 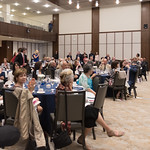 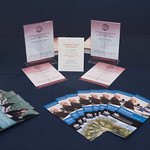 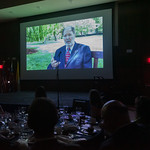 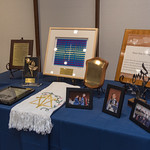 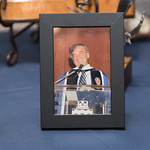 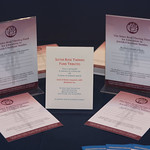 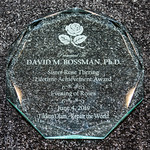 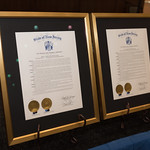 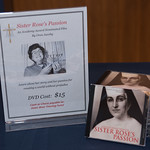 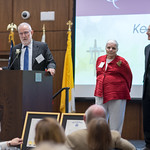 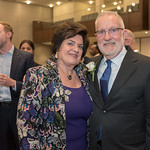 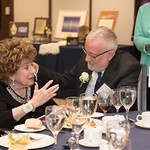