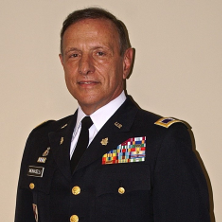 The First Pirate Battalion Alumni formally inducted into the Hall of Fame is Colonel Paul Monacelli.  Colonel Monacelli is an ROTC Scholarship recipient and Distinguished Military Graduate of SHU where he was the Cadet Battalion Commander, Pershing Rifles Company Commander and a founding member of the Scabbard and Blade Military Honor Society. He volunteered for active duty in 1994 and served as Chief, Civil Military Operations for JTF Operation Support Hope (which dealt with the humanitarian crisis after the Rwandan genocide) and again in 1996 for Operation Guardian Assistance, Rwanda.

His public service included terms as a Councilman, Council President and Mayor of Orange, NJ. He has engaged in numerous civic activities to include serving as Chair of Employment Horizons which helps the developmentally disabled and has traveled several times to Nicaragua to build houses with the NGO Bridges to Community. He is also involved with the Careers for Life program of the National Alliance for Insurance Education and Research which assists veterans interested in careers in the insurance industry.

Colonel Monacelli is the CEO of ADP/Statewide Insurance Agencies in Florham Park NJ and was named the National Professional Insurance Agent of the Year in 2003.

We salute Colonel Monacelli for all of his accomplishments!