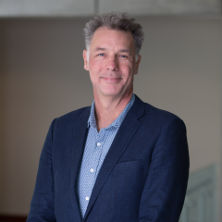 Mark Svenvold received his M.F.A from the University of Iowa Writers’ Workshop where he was a Teaching-Writing Fellow. At Seton Hall, he is an associate professor with an area of specialty in creative writing—both poetry and nonfiction prose. He has published two books of poetry, which both won publication awards, and is currently working on a third book of poems entitled Orpheus, Incorporated. His poems have been published widely in places like Orion, Crazyhorse, Agni Review, The Literary Review, The North American Review, and The New Yorker. Recent poetry awards include the 2018 Spoon River Editor’s Choice Award, selected by Li-Young Lee, and the 2018 Beyond Baroque Poetry Prize, selected by Matthew Zapruder.

Professor Svenvold’s two nonfiction books chart out a territory that might be called “Weirdo Americana.” Big Weather (Henry Holt & Co,) is about tornado chasers and the culture of catastrophilia. Elmer McCurdy: The Misadventures in Life and Afterlife of an American Outlaw, (Basic Books), unravels the bizarre career of a Long Beach, California, fun house mummy. While here at Seton Hall, he has published articles in a variety of magazines including Orion, The New Yorker.com, Popular Science, Forbes, and The New York Times Magazine.

Statement About Teaching, Writing, and a Writer’s Life

Why do that? you might well ask. All I can say is that writing two books of non-fiction has made me a better poet, and being a poet has, without question, made me a better prose writer. Each informs the other.

For those who are skeptical about their adequacy as writers in a poetry class, just know this: the way I teach poetry is informed by my own sense that the lessons one can learn from the practice of poetry are not exclusive to poetry, per se. They’re about problem-solving in language; they’re about accuracy in language; they’re about conciseness—saying the most with the least; they’re about developing a skill set that enables you to choose the right details to quickly capture the essence of a scene or situation. When you practice poetry, you get a better understanding of what needs to happen the next time you write dialogue for a short story. That’s because dialogue is fiction’s attempt to smuggle the poetry of everyday speech into a story.

The point is this: every time you work on a poem, you’re building a musculature of technique and creative thinking that translates extraordinarily well to short-story writing. When you try your hand at poetry, in the safe and welcoming environment of the class, you return to prose a changed, and different—and better—writer. I suppose you could say that’s just a poet talking, but it’s also been my direct personal experience, anyway, in over 35 years of writing poetry and prose. The genres have their differences, of course—but the differences are not nearly as great as people—students, other writers, and readers—suppose. That’s, in part, what the French poet Stephane Mallarme meant when he said, at a public lecture on poetry, that “prose does not exist.”

What he meant, of course, is that writers, at their best, work toward effects in language that shatter generic distinctions. When that happens in a writing class, when a student produces something that transcends the “official” title of the class itself, everyone in the class understands immediately what has just happened--and you might as well call it what it is: poetry.

Late between sets, on a fire escape
that darted six floors down and swayed
to the slightest breeze, half-baked in the halyards,
we'd trade lines and tote the night's mishap.
Meanwhile: the barges ploughing the strait
headed out, and as guys who got paid
good & regular watched what they made
spread in chevrons, the iron-plate,
stern-coughed waves of their passage
a kind of past that lay before them,
visible, rearward, so the future at their backs
makes a ghost of me still, idling here
at Sixth and nowhere. And the freeway, overhead,
roaring, won't say what it is or what it lacks.

The sand shifts with the general drift
& topple of the wave continuo, as if to say...

as if to say let's get one thing straight:
a beach underfoot is replete with itself only,

sui generis shape of shard some poet
(later) will get carried away with,

to illuminate a room. Meanwhile, our children
will shout and point to the shape

of a newly-minted warship on the horizon,
so out of scale with the sailboats bobbing nearby

it seems darkly cut into a cobalt sky.
The red lights of the fantail and bridge mean business

not pleasure. They glow the way embers
of beach fires, constellation-like

in the darkness, suggest the grans sweep of a coast,
or the way taillights on the road heading home

call forth a river, if you wanted to call it that,
and, heaven help us, maybe you do.