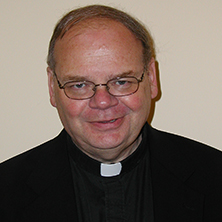 I was ordained a Catholic priest for the Paterson Diocese in 1973, and was named a Prelate of Honor (Monsignor) by Pope John Paul II in 1998.

My doctoral dissertation, James J. Norris. An American Catholic Life, focuses on the only layman to participate in the debates at the Second Vatican Council.

I teach the general courses in Church History, as well as electives in New Jersey Church, the Medieval Church, the Counter-Reformation and Vatican II. I also teach the practicum in Homiletics.

I have served as Parochial Vicar at St. Philip the Apostle, Clifton (1973-1979), and Saint Pius X, Montville (1981-1986); as Pastor of Holy Family, Florham Park (1977-2011) and St. Anthony, Hawthorne (2011- ); and as Vice Chancellor and Secretary to the Bishop of Paterson (1979-1981). After archival studies at New York University, I have served as Archivist of the Paterson Diocese since 1976. I have also served as a Dean in the Paterson Diocese, and am currently a member of the Theological Commission. I have also taught in the EPS (Education for Parish Service) Program of Trinity University in Washington, and the permanent diaconate programs of both the Archdiocese of Newark and the Diocese of Paterson, as well as in several parish adult education programs.

I am the author of Living Stones. A History of the Catholic Church in the Diocese of Paterson (1988); and co-editor of American Catholic Preaching and Piety in the Time of John Carroll (1995) and Building the Church in America. Studies in Honor of Monsignor Robert F. Trisco on his Birthday(1999), as well as articles in several publications, The New Catholic Encyclopedia, and The Encyclopedia of American Catholic History. I also write a column on New Jersey Catholic History for The Beacon, the newspaper of the Paterson Diocese.