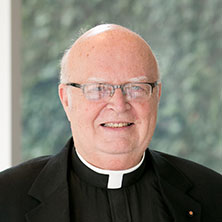 The library of Immaculate Conception Seminary is a theological research library, but also is meant to assist in the preparation of men for priestly ministry in the Catholic Church.  Since its foundation, this library has always had a priest as its director.  Father Lawrence Porter, who currently serves as Director of the Seminary Library, taught Systematic Theology at Immaculate Conception Seminary School of Theology for 32 years, from 1988-2020.  During that time, he published two books in theology and 34 articles, and he served for several years as chairman of the Department of Systematic Theology.

Now, as full-time Seminary Library Director, Father Porter is assisted by a professional librarian, Stella Wilkins.  He is thus able to dedicate much of his time to building up and to featuring the specifically religious character of Immaculate Conception Seminary's library.  For example, over the years, he has built up this library's collection of recordings of religious music and videos.  The current website of the Seminary library features two essays by Father Porter:  one is his explanation of one of the works fo religious art in this library, and the other is an essay promoting this library's collection of recorded music for worship.

Over the years, Father Porter has also mounted in this Seminary library several displays of historical and biblical artifacts, in its main reading room and in its rare book room.  These displays feature rare works such as an autograph letter from Bishop Fulton Sheen and an autograph letter from Cardinal Newman.  Father Porter has also assembled historical artifacts such as Roman dice and Roman nails, Roman historical artifacts which receive prominent reference in the Bible.  Father Porter has also framed portraits of the Seminary faculty over the years and featured certain faculty who made outstanding contributions not only to this Seminary but also to their profession, either by publication or professional assistance and professional participation in pastoral and educational works.  Father Porter is currently working on framed portrait tributes to Monsignor James Turro, after whom Immaculate Conception Seminary's library is named, and to recently-retired Professor Zenobia Fox.

Father Porter has published 34 essays.  Several appeared in theological quarterlies such as Theological Studies, The Thomist, Gregorianum, Communio, The Jurist, and American Benedictine Review.  Others appeared in such pastoral journals as The Bible Today, The Saint Austin Review, and Homiletic and Pastoral Review.  Some were published in such magazines as Crisis, The Priest, and The New Oxford Review.