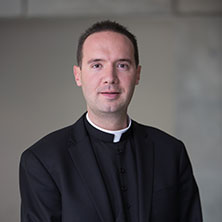 Department of Mathematics and Computer Science

Father Joseph R. Laracy is a priest of the Archdiocese of Newark and member of Seton Hall University Priest Community. He serves as assistant professor of Systematic Theology at Immaculate Conception Seminary. Father Laracy is also affiliated with the Department of Mathematics and Computer Science as well as the Department of Catholic Studies in the College of Arts and Sciences.

Father Laracy's principal theological interests are in the intersection of faith and reason and theology and science. A significant part of Father Laracy's research and teaching is focused on placing the Catholic Intellectual Tradition, especially Theology, in dialogue with the sciences: formal science (e.g., logic and mathematics), natural science (e.g., astrophysics sand evolutionary biology), applied science/engineering (e.g., cybernetics), and medicine (e.g., psychiatry). He offers a theology course on creation and science that is cross-listed with the program in Catholic Studies and the undergraduate core curriculum. His principal technical interests are in systems science: systems theory (e.g., cybernetics), dynamical systems (e.g., modeling with differential equations), and systems engineering (e.g., safety and security engineering).

Father Laracy earned the S.T.B., S.T.L., and S.T.D. (Fundamental Theology) degrees from the Pontifical Gregorian University in Rome in 2012, 2014, and 2019 respectively. His S.T.B. paper, under the direction of Monsignor Patrick Burke, was an analysis of the act of faith in the theology of Father Johann Brunsmann, S.V.D., and Father Pierre Rousselot, S.J. During his licentiate and doctoral studies, Father Laracy had the privilege of studying under Father Paul Haffner, and wrote his licentiate thesis on the compatibility of the theology of creation with the natural sciences in the thought of Pope Benedict XVI. Father Laracy's doctoral dissertation is titled Theology and Science in the Thought of Ian Barbour: An Evaluation for the Catholic Doctrine of Creation. Prior to theological studies in Rome, Father Laracy completed a two-year program in Thomistic Philosophy and classical languages at Immaculate Conception Seminary, Seton Hall University, South Orange, NJ.

Father Laracy's early career interests at the Complex Systems Research Laboratory at MIT concentrated on uncertainty and dynamics in large-scale, complex engineering systems. He looked at key sources of uncertainty, ways to model and quantify uncertainty, and ways to maintain properties such as safety and resilience as systems change over time. His master's degree research was supported in part by NASA Ames Research Center Grant NAG2-1543 (Model-Based Hazard Analysis Research) and National Science Foundation Grant CNS-0550008 (A Socio-Technical Approach to Internet Security). His thesis was titled A Systems-Theoretic Security Model for Large Scale, Complex Systems Applied to the US Air Transportation System.

As an undergraduate student at the University of Illinois, he pursued research to develop a scalable RSA cryptographic co-processor under the direction of Dr. Julian Palmore, supported in part by National Science Foundation Grant DMS 99-83160 (Vertical Integration of Research and Education in the Mathematical Sciences). Laracy also worked on a software pattern-based fly-by-wire aircraft control system with the guidance of Dr. Ralph Johnson. In the course of his studies, he held engineering positions with Lucent Technologies (Wireless Terminal Interoperability Laboratory), Ball Aerospace and Technologies (NASA Deep Impact Mission), and Light Source Energy Services. He also served as a teaching assistant for a course on the Physics of Nuclear Weapons, Warfare, and Arms Control.

He is a member of various professional organizations. These include the Center for Theology and the Natural Sciences and the Institute of Electrical and Electronics Engineers (IEEE): Computer Society & Systems, Man, and Cybernetics Society. Father Laracy is a member of the inaugural class of fellows of the International Institute of Informatics and Systemics.

Father Joseph Laracy is an Eagle Scout and a graduate of West Essex Regional High School.