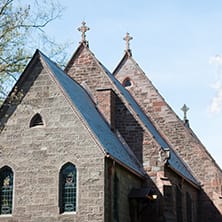 I am a theological ethicist specializing in Catholic and Protestant (ecumenical) moral theology, the ethics of Jonathan Edwards, aesthetics (art theory), the political morality of race and ethnicity, and Asian American theology and ethics. My teaching areas also include the ethics of war and peace and the relationship between science (evolutionary theory) and religion.

I am the author of Disciplined by Race: Theological Ethics and the Problem of Asian American Identity (Wipf&Stock, 2019), the first major critical and constructive interpretation of Asian American experiences of race by a theological ethicist. Reframing the terms of debate for Asian American theology and ethics, this book examines the central importance of a racialized conception of Asian American identity for contemporary theological and philosophical discussions on cultural authenticity, the relationship between autonomy and relationality, and racial solidarity and resistance.

My current research projects include a follow-up to my book Disciplined by Race. This second volume provides an Asian American engagement with Black and Latinx liberation theologies and their accounts of the cross/christology, social justice, and nonviolent resistance. I am also working on a book examining the role that aesthetic experiences play in forming as well as fracturing political community and public discourse. Lastly, I am researching conceptions of the emotions from theological and evolutionary-scientific perspectives to better understand the necessity as well as perils of the emotions for the moral life.

These research projects reflect my primary interest in the nature of moral deliberation: What are the mechanics of moral reasoning? How do we make moral judgments? And what are the impediments to moral decision-making and action. I am especially interested in the ways that aesthetic experience, race, and the emotions advance or constrain moral discourse, solidarity, and participatory democracy.

In addition to major academic journals and edited volumes, my research and teaching have appeared and/or been featured in a number of blogs and news sites such as the Wabash Center's Race Matters in the Classroom, CivicStory/NJ Arts News, NJ 101.5 FM, and The Los Angeles Times.

At Seton Hall, I currently co-direct the Medical Humanities Minor, a program that I developed with my colleague Dr. Abe Zakhem who chairs the Department of Philosophy. I also coordinate the Core 2101 program of the University Core. Core 2101 is a required sophomore-level course that examines the social relevance of faith and reason within the Catholic intellectual tradition. I am also the co-editor of Christianity and Culture (Kendall Hunt, 2010, 2013), the textbook adopted for the Core 2101 program. In Seton Hall's Department of Religion, I have served as the faculty adviser to Seton Hall's chapter of Theta Alpha Kappa, the national honor society for religious studies and theology. I have also served as the executive secretary and treasurer of the University Faculty Senate, and headed the institutional and academic assessment working group for Seton Hall's most recent Middle States Accreditation review. With my colleague Monsignor Richard Liddy of the Center for Catholic Studies at Seton Hall, I host the Ethics and Economic Forum, a faculty venue for interdisciplinary discussions on economics, theology, ethics, and social justice.

I have been invited to participate on a number of academic and professional boards, including the Editorial Board of the Journal of the Society of Christian Ethics, the Alumni Advisory Board of Yale University Divinity School (I was elected as Vice-Chair for 2011-2012), and the Advisory Board of the Ethics Institute at Kent Place School in Summit, NJ. I am the past convener of the Asian American Ethics Working Group of the Society of Christian Ethics and the Religion and Society Section of the College Theology Society. I currently serve on the grants jury for the American Academy of Religion.