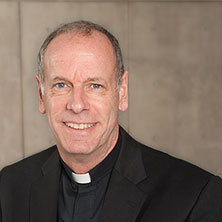 Reverend Monsignor Joseph R. Chapel, S.T.D., Adjunct Professor of Moral Theology, earned an M.A. in International Relations from the Paul S. Nitze School for Advanced International Studies (SAIS), The Johns Hopkins University. He also earned an S.T.B. from The Pontifical Gregorian University, Rome, and an S.T.L. and an S.T.D. from Accademia Alfonsiana (Lateran University), Rome. His doctoral dissertation is titled "Why Confess Our Sins Out Loud? An Analysis Based on the Dialogical Philosophy of Ferdinand Ebner in Light of the Philosophy of Language and the Symbolic Sacramentology of Louis-Marie Chauvet." Ordained to the priesthood in 1992, Monsignor Chapel has taught Moral Theology, Reconciliation and Anointing and Preaching Practicum and has served as a member of the theological faculty of the Pastoral Provision. His publications include "Why Confess Our Sins Out Loud? Some Possibilities Based on the Thought of Ferdinand Ebner and Louis-Marie Chauvet" (Irish Theological Quarterly), "Dialogical Personalism Revisited" (Studia Moralia) and "Philosophy as Preparation for Sacramental Theology and Moral Life" (Seminary Journal). Monsignor Chapel has served the Seminary in varied capacities, among them as professor, mentor, spiritual director, confessor, Associate Dean, Co-Director of the Institute for Christian Spirituality and Director of the Center for Diaconal Formation. In Spring 2009, he was named Chaplain to His Holiness with the title of Monsignor. In 2014, Monsignor Chapel accepted the appointment as Spiritual Director of the Casa Santa Maria in Rome, Italy. He currently serves as Pastor of Our Lady of Mercy Parish, Park Ridge, NJ.