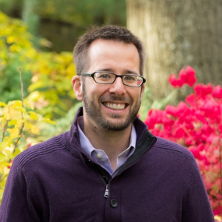 Jonathan Farina serves as Chair of the Faculty Senate and as President of the Northeast Victorian Studies Association (NVSA). He teaches undergraduate and graduate courses on nineteenth-century British literature, the novel, and critical theory, as well as the Honors Colloquium on the Early-Modern World, and researches the history of fiction as a form of knowledge.

Jonathan's first book, Everyday Words and the Character of Prose in Nineteenth-Century Britain (Cambridge University Press 2017), earned Honorable Mention for the Sonya Rudikoff Prize for the Best First Book in Victorian Studies. It describes the grammar of everyday language that underwrote what counted as knowledge for Victorian writers, including many novelists and scientists such as Lyell, Darwin, and Tyndall. "Characterization," it shows, was a historically specific mode of description that represented things other than fictional people and that aimed not to reproduce facts but to deviate from them—and yet still tell the truth.

Jonathan is working on a second book, Aformalism: Undisciplined Knowledge in Nineteenth-Century Britain, which recasts Victorian literary criticism as a repository of alternative, never-institutionalized forms of knowledge production rather than a mere genealogy of new criticism and other contemporary modes of interpretation. To this end, he is finishing an article on "awkwardness" as the constitutive affect of literary criticism and another on the problem of translating "obviousness" into respectable knowledge.