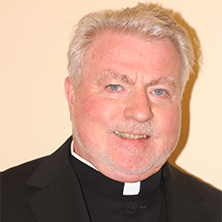 Reverend John J. Cryan, M.Div., Retired Director of Pastoral Formation, is a priest of the Archdiocese of Newark. A native of the Bronx, he was associated with Xaverian Brothers for three years after he completed high school. Father Cryan followed his higher education formation at Pace University and Manhattan College, earning a B.A. He then attended Immaculate Conception Seminary School of Theology at Darlington, earning an M.Div. During this time, he worked as a full-time junior high school teacher and as a part-time author with the William H. Sadlier Publishing Company.

In 1977, Father Cryan entered the priestly formation process at Immaculate Conception Seminary. After priestly ordination in 1981, Father Cryan served at St. Andrew Parish, Bayonne; St. Vincent de Paul Parish, Bayonne; and St. Mary Parish, Dumont. Father Cryan also served as pastor of Our Lady of Mercy Parish, Jersey City, and as administrator and later as pastor of Our Lady of Sorrows Parish, Jersey City. He served as Dean of Deanery 12, Hudson County South from 1996 until 2001 and from 2009 until his assignment as Formation Faculty member and Director of Pastoral Formation at Immaculate Conception Seminary, which began on July 1, 2015.

Besides his parochial assignments, Father Cryan assisted within the collegial aspects of the Administration of the Archdiocese, serving as a member of the Priests Personnel Policy Board, as member and chair of the Presbyteral Council, and as a member of the Advisory Committee for the Ongoing Formation of Priests. Since 1979, he has been associated with the Metropolitan Tribunal of the Archdiocese, serving first as a Canonical Consultant, then as an Advocate, and now as a Judge of the Metropolitan Tribunal. Additionally he worked within Catholic Community Services as the Director of Parish Services for the Prevention and Education of Addictions. For almost ten years, he assisted as chaplain to the ministry to hearing disabled people in Hudson County. He also assisted with the work of Catholic Charities in Hudson County as a member of the Community Advisory Board for Catholic Community Services, Hudson County.

Father Cryan has also served on various Archdiocesan committees including the Core Committee of RENEW 2000 and the Stewardship Advisory Board. For ten years, he was a presenter in the “Spotlight on the Catechism” series. On a local level, Father served as a member of the Community Health Awareness Committee of Bayonne Medical Center, as a member of the Board of Trustees of the Bayonne Mental Health Clinic, and as a Board Member of Hudson Hospice Volunteers.

Father Cryan served the larger Church within the United States as member of the team of presenters of the National Pastoral Life Center and Pastoral Life Institute, working to assist new and seasoned pastors preparing to meet the challenges of the Church in the 21st century.