(How) Does the Bible Even Exist: A Theology of Scripture 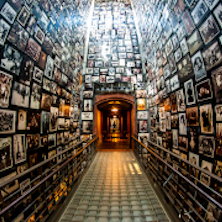 Professor Explores Scripture and the Holocaust Gregory Y. Glazov, D.Phil. (Oxon.), Professor and Chair of Biblical Studies, earned M.Phil. and D.Phil. degrees in Jewish Studies in the Graeco-Roman World from Oxford University in 1989 and 1993, respectively, the former on a Rhodes Scholarship. He specializes in Old Testament Studies and in the Jewish writings of the Russian philosopher Vladimir Solovyov. These areas of specialization are illustrated by his dissertation on the structure of biblical prophetic call narratives, The ‘Bridling of the Tongue’ and the ‘Opening of the Mouth’ in Biblical Prophecy (Sheffield Academic Press, 2001), and articles on biblical anthropology and medical ethics (Linacre Centre), canonical criticism of prophetic literature (InterVarsity Press), monastic witness in Russia and the West (Eastern Christian Studies), compunction in Scripture and the Church Fathers (Journal of Early Christian Studies), the role of Judaism and Jewish suffering in Pauline Christology (Oxford University Press), and by his translation and commentary on Solovyov's writings on Judaism, The Burning Bush: Writings on Jews and Judaism (Notre Dame University Press, 2016).

His current projects include a textbook on Wisdom and the Psalms (Fortress Press); a Catholic theology of Judaism (Notre Dame University Press); a volume of proceedings of the Catholic Biblical Association taskforce on the use of the Old Testament in the Gospel of John; an article on "Revelation and the Holocaust" (OUP, forthcoming 2021), and A Database of 100 Jewish and Catholic Writings on the Holocaust, sponsored by the Catholic Biblical Association and the USCCB's Confraternity for Christian Doctrine.

(How) Does the Bible Even Exist: A Theology of Scripture

Professor Explores Scripture and the Holocaust