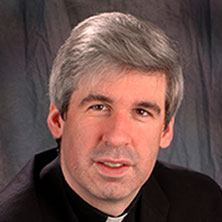 Inviting the faithful into deeper relationship with Jesus Christ through seminary ministry has been a joy. The opportunity to do so by serving the spiritual direction of seminarians and others and by teaching, especially in the area of Liturgy and Sacraments, has been a grace given to me. My interest in Saint John Henry Newman’s life and works has led me to give ten academic conference papers and to some writing. I served on the board of directors of the Newman Association of America from 2001 to 2016. In 2016, I was elected to be a board member emeritus.  I served as president of the Federation of Seminary Spiritual Directors for 2018-2021. I am very happy also to serve as a weekend and weekday assistant priest at Holy Trinity Church in Westfield. A great blessing was the opportunity to participate in an international ecumenical dialogue, the Joint Commission for Dialogue between the Roman Catholic Church and the World Methodist Council, from 2007 to 2016. During summers I have enjoyed the privilege of teaching and doing spiritual direction at The Institute for Priestly Formation at Creighton University in Omaha, Nebraska.