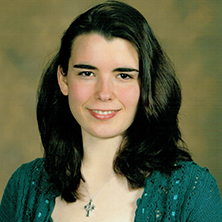 Eilish R. Harrington, Institutional Planning & Communications Analyst, joined the Seminary community in January 2009 as Assistant Editor of Publications and Assistant Marketing Coordinator for the Institute for Christian Spirituality. In August 2009, she became Institutional Research Specialist for the Seminary, and in April 2017, Institutional Planning & Communications Anlayst for the Seminary. A 2008 summa cum laude graduate of Seton Hall University, with a B.A. in Liberal Studies and Classical Studies, Eilish is a member of Eta Sigma Phi National Classics Honor Society and Theta Alpha Kappa Religious Studies Honor Society. Since 2002, Eilish has been a member of St. Columcille United Gaelic Pipe Band, Kearny, NJ. She also serves as an advisor to Pirates of Irish Persuasion & Extraction (PIPE), Seton Hall University’s Irish cultural society (which she founded in 2006), and is the founding President of the PIPE Alumni Club (established in 2013). In 2016, Eilish was named to The Irish Echo 40 Under 40, an annual honor roll of Irish Americans who have distinguished themselves in their respective fields of work before reaching the age of 40.