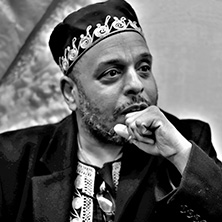 A Ph.D. in Communication from the University of Maryland’s Philip Merrill College of Journalism, Burroughs he is a lifelong student of the history of Black media. He is the author of Warrior Princess: A People’s Biography of Ida B. Wells and Marvel’s Black Panther, A Comic Book Biography, From Stan Lee to Ta-Nehisi Coates, both published by Diasporic Africa Press. His audiobook, Son-Shine On Cracked Sidewalks, is about the 2014 Newark, N.J. mayoral election. He is a co-author with Herb Boyd of the book Civil Rights: Yesterday and Today, and one of four primary authors of the book Civil Rights Chronicle, both published by Legacy Publishing/Publications International. He is the co-editor with Dr. Jared Ball, full professor at Morgan State University’s School of Global Journalism & Communication, of the book A Lie of Reinvention: Correcting Manning Marable’s Malcolm X, published by Black Classic Press. He is a contributor to several other books, including Race And Resistance: African-Americans in the Twenty-First Century (South End Press), Putting The Movement Back Into Civil Rights Teaching (Teaching for Change and PRRAC), The Fifties Chronicle (Legacy/Publishing/Publications International), and the Ethnic Media In America scholarly anthology series (Kendall/Hunt). He is writing a book about Freedomways magazine and hopes to one day write a monograph on WABC-TV’s Gil Noble and his television program, Like It Is. In 2020 he just finished a full draft of Talking Drums and Raised Fists: Mumia Abu-Jamal, A Biography Of A Voice, and is editing an anthology, a collective biography of the imprisoned journalist.

He has written for magazines such as The Source, ColorLines, Black Issues Book Review and The Crisis, websites such as The Root, NewsOne.com, Ebony.com and BlackAmericaWeb.com, newspapers such as The New York Amsterdam News and The (Newark, N.J.) Star-Ledger, and for wire services such as The NNPA News Service, Capital News Service (of the University of Maryland’s Philip Merrill College of Journalism) and the Knight-Ridder Wire. He began his career as a correspondent for The New Jersey edition of The Afro-American newspaper chain in 1985. He currently writes for imixwhatilike.org, Ball’s long-running multimedia website and is thinking about writing longform journalism for Medium.com.

Burroughs is a former National Correspondent and News Editor of the NNPA News Service (nnpa.org; BlackPressUSA.com). His media criticism column, “Drums In The Global Village,” was syndicated to about 200 Black newspapers for much of the 1990s. A separate version of the column was published on The Black World Today, a now-defunct website, in 1999. Since 2007, his blog, drumsintheglobalvillage.com, is a continuation that kind of thinking about Black people and mass (and now, demassified) media.