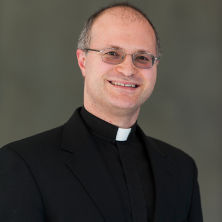 Brian Keenan Muzás never outgrew his childhood love of planes and rockets. He graduated summa cum laude with a B.S.E. in mechanical and aerospace engineering from Princeton University in 1996. Although a graduate-level course in energy and environmental policy at Princeton's Woodrow Wilson School of Public and International Affairs foreshadowed his future enrollment in the doctoral program at the Lyndon B. Johnson School of Public Affairs at the University of Texas at Austin, he first used a National Science Foundation Fellowship to obtain an M.S. in aeronautics from the California Institute of Technology in 1998. He then entered seminary. After receiving an M.Div. in pastoral ministry, an M.A. in systematic theology, and two John Paul II Medals for academic accomplishment at Seton Hall University, Father Muzás was ordained a Catholic priest in 2003. Assigned to a parish, Father Muzás used his days off variously to teach computer science at Seton Hall or to serve as co-chairman of an NGO conference committee at the United Nations.

In 2007 Father Muzás was assigned to the priest community at Seton Hall University where he served for a year as a full-time adjunct in the School of Diplomacy and International Relations. Despite such well-rounded activities, it was a Harrington Fellowship that ultimately allowed Father Muzás to pursue scholarship at UT Austin that drew on all aspects of his background; he graduated with his Ph.D. in Public Policy in 2013.

Father Muzás' research interests include international security, defense systems, and ethics, and he is currently exploring how religious cultural heritage has influenced nuclear decisions in the past in order to better understand similar issues today.