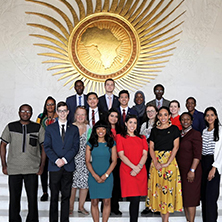 Assefaw Bariagaber is Professor in the School of Diplomacy and International Relations at Seton Hall University. He also serves as the Director of Graduate Studies and the Director of the Graduate Certificate Program in Post-conflict State Reconstruction and Sustainability. Prior to joining Seton Hall University, Dr. Bariagaber taught at the University of Nebraska at Kearney from 1991 to1998. In 1998-1999, he was on a year-long research assignment as Princeton Research Fellow at the Center of International Studies, Woodrow Wilson School of Public and International Affairs, Princeton University.

Dr. Bariagaber graduated with a Ph.D. in Political Science from Southern Illinois University at Carbondale in 1990 and joined the School of Diplomacy and International Relations in the Fall of 1999. He was the first faculty member in the School to be promoted to full professor and played a leading role in the growth and continued expansion of the School. This included the setting up of new programs, designing new courses, and putting formal structures where there were none before. In 2006, he led efforts to establish the School’s first department – the Department of Diplomacy and International Relations -- and became the founding chair. He served in that role from 2007 to 2013.

At the professional level, Dr. Bariagaber has served in different capacities: President of the Association of Third World Studies (now renamed Association of Global South Studies) in 2010-2011; Secretary of the Eritrean Studies Association in 2004-2012; and Associate Editor of the Eritrean Studies Review in 1999-2012. In addition, he has provided pro bono asylum case services to the Immigration and Refugee Board of Canada and the Political Asylum Research and Documentation Service in Princeton, NJ.

Dr. Bariagaber is the editor of the book titled, International Migration and Development in Eastern and Southern Africa (OSSREA, 2014) and the author of the award-winning book titled, Conflict and the Refugee Experience: Flight, Exile, and Repatriation in the Horn of Africa (Ashgate, 2006). He has also published numerous articles on conflicts and refugees in such refereed journals as the Journal of Modern African Studies, Ethnic and Racial Studies, International Migration, and Africa Today, and written papers and book chapters for the International Organization for Migration (IOM), the United Nations High Commissioner for Refugees (UNHCR), and the UN Association of the United States.